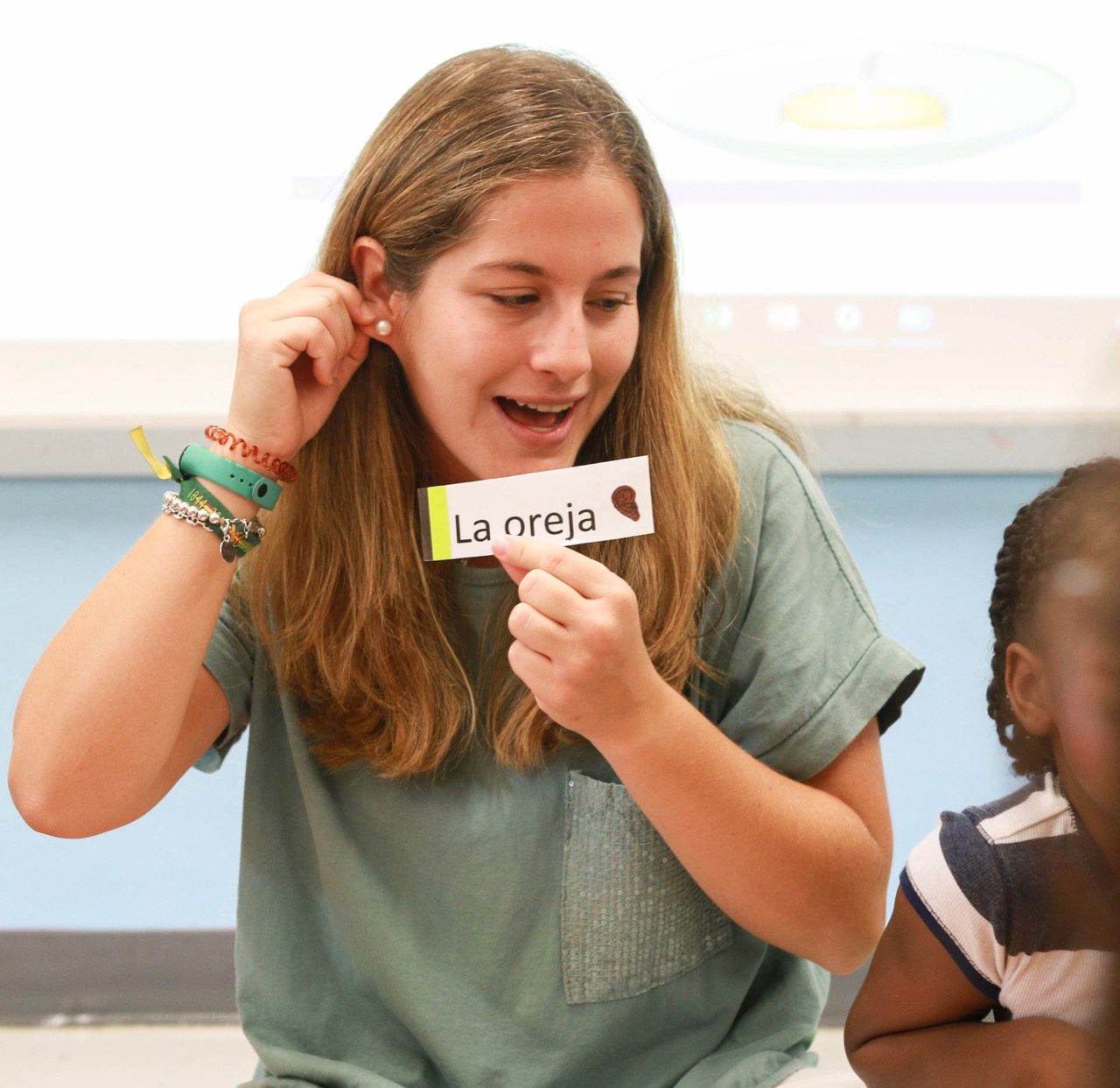 At Lakewood Elementary School, Spanish and English speakers learn together

After kindergarteners take their seats at a small octagonal table at Lakewood Elementary School, their teacher tells them in Spanish to pick up a blue crayon and fill in worksheets.

One student dives into coloring an octopus. Hesitantly, the remaining four begin to understand what is expected and follow his lead.

“Thumbs up if you understand,” instructor Heidi Miles says, after seeing the blank expressions. “Entender a los instructors,” she quickly adds.

No child in class comprehends both sentences. Not yet. This kindergarten classroom is Lakewood’s first dual-language immersion class. Half the students are fluent in English, half in Spanish. Upon leaving Lakewood after fifth grade, all are expected to read, speak and write proficiently in both.

In kindergarten, 90% of the material is taught in Spanish, and the remaining 10% in English. As the students become more proficient in both languages, the ratio of Spanish to English will become more even by fifth grade.

Two Durham school student parents, Rocio Evans and Linda Stone, as well as district staff advocated for dual-immersion classrooms at a school board meeting in March. Kimberly Marion, director of academic and magnet programs, briefed board members on the benefits of having children who speak different languages learn together in the same space.

Marion also cited a 2012 study by Wayne Thomas and Virginia Collier of George Mason University, which concluded that dual-language education is the most effective way for students to acquire a second language. Students engage with a new language in all subjects, including math and science. After classroom observation and research,  Thomas and Collier concluded that the earlier students begin this type of language study, the more effective it is.

“This program is a game changer on so many levels,” said James Hopkins, principal of Lakewood, a school that jumped 18 points on the grading scale of the North Carolina school report card over the past year.

Twenty-three kids are in the new class. Admission was decided through a lottery that was partly random but also had specific diversity targets, according to the lottery application.

The 35 initial applicants were divided into native Spanish speakers and native English speakers, with the intended goal of splitting the classroom 50/50 according to the lottery application. Racial diversity was also considered when selecting students, as district leaders wanted a class that is  representative of Lakewood’s demographics, which during the last school year was 53.2% Hispanic, 35% black and 7.7% white.

Participate helped Lakewood hire Fátima Martínez, the new dual-immersion teacher who is from Spain. It also briefed parents on the programs’ structures and goals.

Participate helps manage parental expectations about their children’s progress, Hopkins said. Despite initial struggles, parents were told that they would see significant development in language comprehension around November and December.

“The transformation is an amazing thing to witness because the first day of school, the kids know zero. And then at the end of the year in May the kids are not only able to understand, but they can now take the language and communicate with each other,” said Carlos Ramirez, director of educational programs for Participate, during an interview at Lakewood this month.

Miles, the program’s coordinator, is in the classroom each day, and particularly helps those, like her, who are not native Spanish speakers. From the first day of school, she has watched kids who never spoke Spanish previously absorb vocabulary to follow Martínez’s instructions.

Miles is already seeing bonds grow between children who likely would have had more trouble communicating just weeks ago too. “You see that friendship and that bond of kids saying ‘that’s not what she meant’ or kids who can speak a little bit of English and Spanish, they can support each other,” she said.

To strengthen such links, Miles is working with parents to establish a buddy program to pair the families of students in class. The hope is that parents will develop relationships and help each other in navigating the ups and downs of a class that will remain together through 5th grade.

For Hopkins, offering  a six-year dual-immersion program is an additional way to ignite interest in his neighborhood school. “I was very adamant that Lakewood remain a neighborhood for 1,001 reasons. This program is for my families,” he said.

Hopkins predicts increased enrollment for next year’s class, which will be one metric he will use to assess the program’s progress.

Participate will assess the program each year to ensure that students are meeting comprehension benchmarks. After kindergarten and first grade, Participate will test on site words – common words such as the, as, and is – before moving onto oral and reading assessments beginning in second grade.

“By the time they are in fifth grade they are bilingual, biliterate, and bicultural,” Ramirez said.

After the students finish coloring, Martínez starts singing the class clean up song. Students clap along, but only some join in with Spanish.

Together, though, they rise from their seats, finding their assigned spots in a line marked by stickers on the floor. As they wait to go outside for recess, a Spanish flag hangs next to the door, and their clean up song comes to an end.

At top, kindergarten teacher Fátima Martínez reviews vocabulary with her students who are learning both Spanish and English in a new dual immersion classroom at Lakewood Elementary School. Photo by Cameron Beach.

Corrections: This article originally misstated by how much Lakewood Elementary School improved on the grading scale of the North Carolina school report card in the past year. Lakewood’s score rose by 18 points. The article also misstated Carlos Ramirez’s title at Participate Learning. He is director of educational programs.