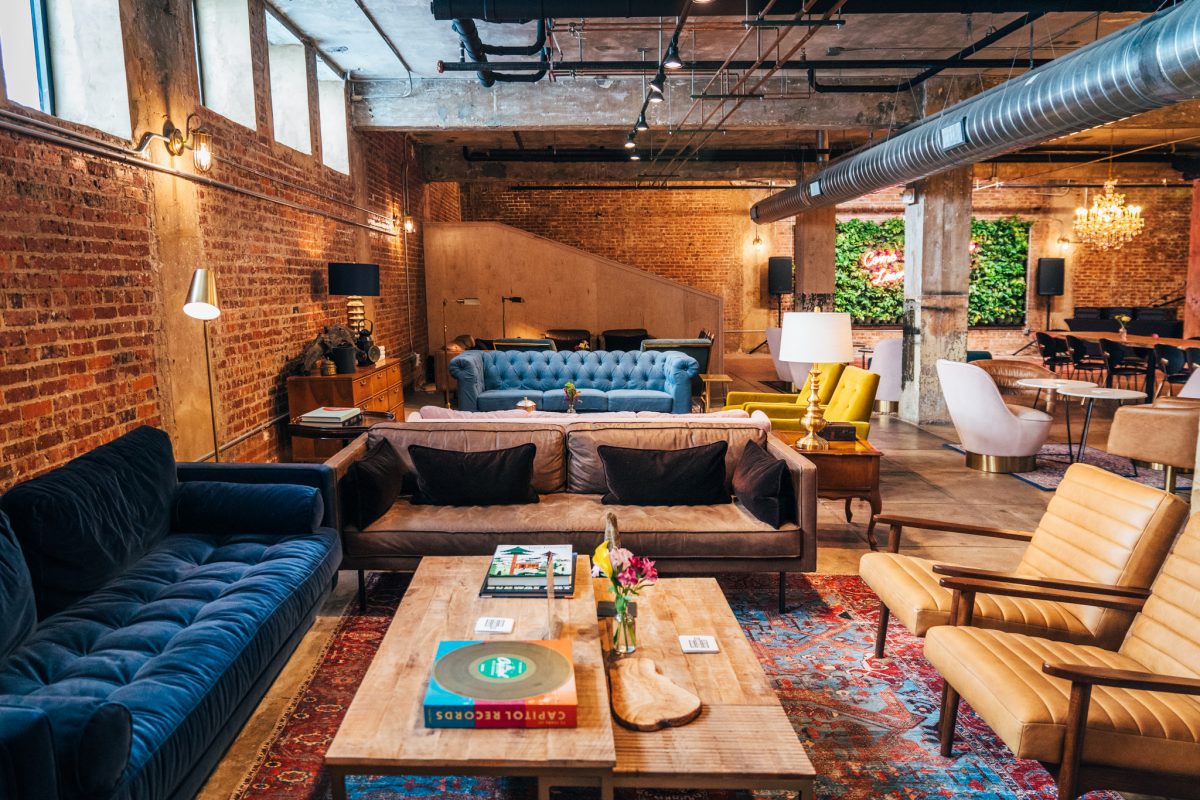 If you’re a yuppie, or soon-to-be yuppie, on Facebook in Durham, it’s hard to escape the somewhat mysterious advertisements for something called Union Member House.

If you google “union member house durham nc,” the first result is a get-offline.com blog post titled “Is Union Member House the Coolest New Hangout Spot in Durham?” The interior design of the club depicted in the advertisements seems designed for Instagram: a green vintage sports car, a shelf of coffee-table books. A pink fluorescent cursive sign mounted on a wall of green plants reads “Come as strangers, Leave as friends.”

And that’s the idea. Actually, the idea is for Union, as founder Sonny Caberwal calls it, to be a “third place,” which isn’t home or work. In practical terms, Union Member House isn’t that enigmatic. It’s a social club: pay $250 a year as an entry fee, and you gain access to the club. During the day, it’s like a coffee shop. At night, it’s dinner or a bar. It host events for networking. When I interviewed Caberwal recently, people were having a book club at a table nearby, discussing Michelle Obama’s “Becoming.”

Caberwal has always connected people. As an undergraduate at Duke, and as a Sikh from Asheboro, he says he disliked going to parties with only white people or only black people. He took it upon himself to “throw parties where different people would come together.”

Caberwal says Union is the 10th startup he’s been a part of, and the fourth he’s led. Most recently, Caberwal founded a company called Bond, which would mimic a handwritten note for $3.50. All you had to do was type the message and your recipient’s address into the site and enter your credit card information.

“Being nice to your customers isn’t just the nice or right thing to do,” he told a Entrepreneur.com. “It’s also good for business.” The site closed last month.

Caberwal, who graduated from Duke in 2001, says that his newest effort came about because in the modern age, most people are “poorly networked,” and because of that, social clubs are more important.

“A library can be a social club, a church can have a social club aspect to it, fitness groups,” Caberwal said. But whereas the hallmark of traditional social clubs, Caberwal is aiming for something different. “We live in a world where we try to be more equal-access as a society, and yet social clubs continue to have an exclusionary tone to them. The Wing is for women. WeWork is for entrepreneurs, Soho House is for… creatives. Country clubs are for, you know, people who like golf and tennis and live in a certain area.”

“If you apply to Union, you will get in,” Caberwal said.

To claims of exclusionism—after all, $250 isn’t cheap—Caberwal says he’s working on ways to make it more accessible, but also that Union is already more accessible than it seems.

Nonetheless, Union Member House has already been a target for criticism, first for a photography exhibit it initially called “Do It Like Durham,” also the slogan coined by activists who toppled the Confederate statue—the club later posted an apology note on Facebook explaining that the person who titled the exhibit wasn’t aware of its connection an existing movement—but also for the name of the club itself. The average Union Member House member is almost certainly not a union member.

“I think names should represent what you do, and I think that there are a lot of meanings of union, but the goal of Union is to bring people together,” Caberwal explained. “We’re doing it in college towns, and I thought it was like student unions, but really it’s about bringing people together. That’s our No. 1 goal.”

But why union members? Surely to most people the combination of the two words signifies members of a labor union.

“It is a challenge, it’s a challenge that people are like, hey it’s a worker’s union. My last company was called Bond, and bond means lots of things to lots of people. A bond is literally a financial instrument; it can also mean a relationship,” Caberwal said. “Union can be a labor union, it can also be a marital union, you know? For many people, and calling it Union Member House is particularly challenging, and probably not the best long-term name, right? Because like, a union member, that’s like even more loaded. It’s not intentional. My goal is to make it inexpensive, my goal is not to make it free. The reason I don’t make it free is because people don’t put effort into free. You have to put effort into making community.”

Part of the reason Union Member House came about, Caberwal says in the interview and in a letter posted on its site and Facebook, is because last year he experienced some unexpected health complications—a growth in his lymph nodes—and began to “re-evaluate.” Caberwal canceled a move to New York, enrolled his two children back in school at Durham Academy and asked his wife, who he says is “really cool,” if they could stay in Durham and he could try to do Union Member House full time for a year. The building previously housed the Durham Masonic Lodge, and later the Durham Health Department, but has been empty since 1992. According to the UMH website, a second location is planned to open in Austin, Texas, in 2019, and a third in Madison, Wisc., in 2020.

Caberwal, who describes himself as a “fairly scrappy entrepreneur,” views his role as setting things up for other people to succeed. He doesn’t see the club as his life’s work, and suggested that he plans to eventually hand it over to new management.

“Union is not my thing,” Caberwal said. “I don’t view it that way. My role as a founder and a leader is to empower and support talented people. So if you were to ask, ‘what are the things that keep you up at night?’ It would be people. People are the asset and the focus. And my job is to find and support great people. So I don’t think of this as ‘my task.’ I have a dream and a goal.”

Union Member House employed eight people in late November of last year, according to the tour guide when I toured at that time, around when they opened. Caberwal says he can’t disclose how many people are employed there now, but he says there are four people whose full-time job is to facilitate connections between people.

Of course, facilitating connections between people is Union Member House’s whole mission. It’s neither a standard coworking space nor a country club, but it functions as both—a place for people willing to pay for access to an attractive space where you can never be totally sure whether you’re at work or not. Caberwal isn’t really concerned about people who take issue with the name or concept. He’s selling connections, and he’s confident that there are buyers.

Published in Life in Durham and Uncategorized