Home » Cocoa Cinnamon and the art of the coffee shop 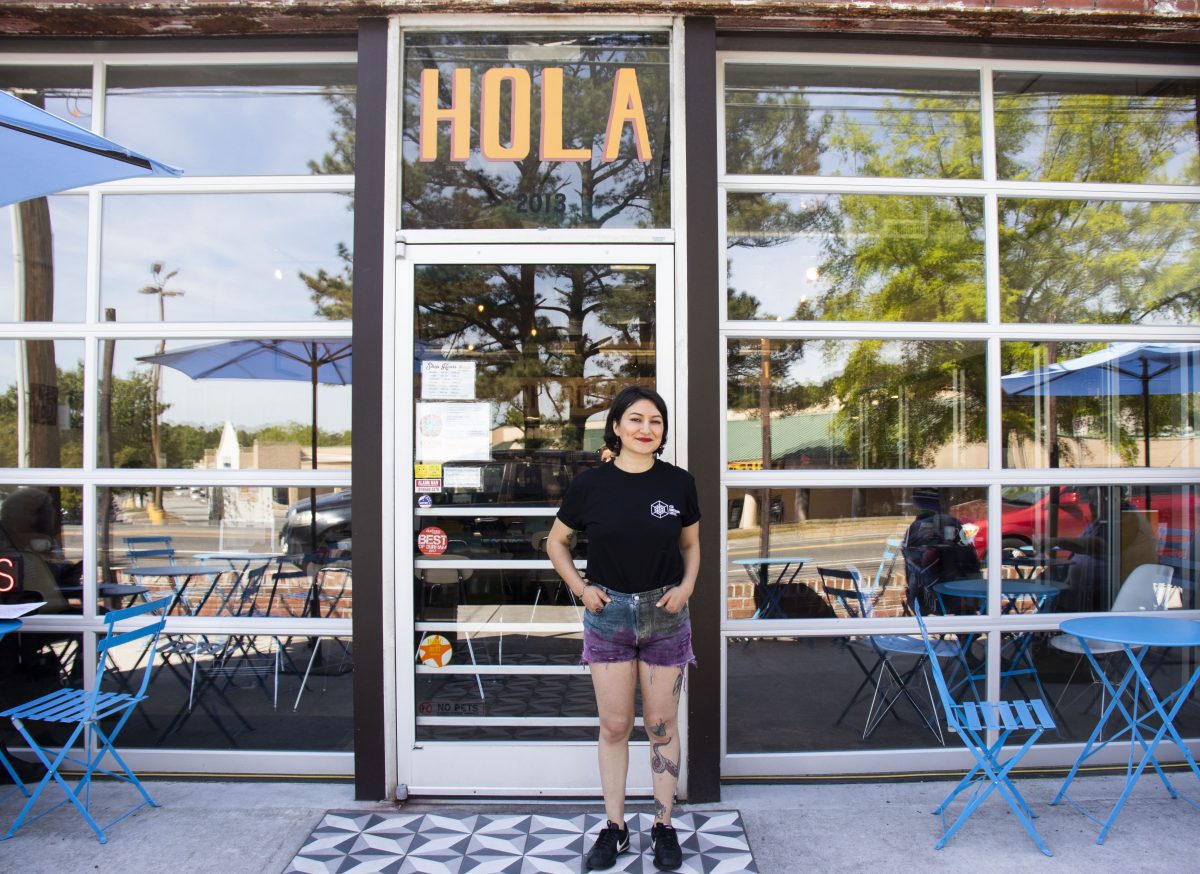 Cocoa Cinnamon and the art of the coffee shop

During a recent visit to Cocoa Cinnamon’s Geer Street cafe for my customary rose petal-garnished latte, a woman came in, got in line, and after a moment, whispered to me, “What is this?” I told her it was a coffee shop, and she nodded, ordered a pastry, and left.

It’s not clear what she was expecting when she walked in, but I can understand the confusion. Even Cocoa Cinnamon’s owners approach their shops more as art projects than just another place to get coffee.

“We are artists,” Areli Barrera de Grodski told me recently at a table at the Lakewood location. “Leon was an installation artist before this, and a lot of his artist friends were like, ‘Why did you stop making art?’ And he’s like, ‘I haven’t.’ This is an installation, and this is very much all of our energy and our selves are being poured into these shops. Roasting coffee is an art in itself.”

Barrera de Grodski looks the part of an artist: she wears a pink biker jacket over a black shirt, statement earrings, a bunch of rings and a button with a little drawing of a hand giving a middle finger on it. If you drink coffee in Durham, you’ll likely recognize Barrera de Grodski from a visit to Cocoa Cinnamon, one of the city’s most recognizable and ubiquitous local coffee businesses. She and her husband, Leon Barrera de Grodski, co-own the business, which has grown to three coffee shops and a roastery, which resides behind glass at Cocoa Cinnamon’s most recent location in the Lakewood neighborhood.

The name, Areli Barrera de Grodski explained, came to her husband in a dream.

“I call it the beta waves right before you’re awake and still kind of asleep,” Barrera de Grodski said, laughing a little. “I also call it the god mind—it’s where all the creative juices come and it’s just like you’re not even in your own body, everything’s just flowing. ‘Cocoa Cinnamon’ came to him in that state.”

Neither of the Barrera de Grodskis have any business schooling, and Areli’s discussions of the business focus more on aesthetics and experiences. She described the concept behind a series of paintings she plans on adding to the Lakewood location once they have enough to pay a local muralist, a history of coffee from two perspectives: indigenous people and Westerners.

“The name was inspired by the spice trade routes and the history of human migration,” Barrera de Grodski said. “It’s just looking at everything we work with and looking at its origins and its history and the cultures and the people that are involved in all of this. That’s what inspires our menu, and I think the idea of stories and relationships and coffee being this catalyst for conversation is what drives our business.”

Despite scrappy origins as a bicycle-borne coffee cart, the business now employs at least 38 employees—a few new hires are so new they aren’t in the shop’s system yet. And Barrera de Grodski said she wants the shop to start careers for their employees, not just jobs.

The couple’s journey in business began shortly after they were married in 2010, when they began selling chocolates that were made in Barrera de Grodski’s mother’s kitchen in Cherokee, N.C., but inspired by her native Tijuana, Mexico.

“That was really fun for me to learn the history of chocolate and find out where it actually came from,” Barrera de Grodski said. “It just really rooted me in my own identity and culture.”

When the couple decided to move to Durham in 2011, they knew they wanted to open a coffee shop, but that they wanted to have a “genuine relationship” with the community around Geer Street before opening. The words “bike coffee” came to Leon Barrera de Grodski in a dream, too. So, with $75 in their bank account and no credit but a drive to succeed, they bought a rickshaw, went to Seven Star Cycles downtown and got help from friends and community members to engineer a bike, christened bikeCOFFEE, that could carry an espresso machine. Their first model didn’t exactly work out.

“The bike is built, and it’s like 400 pounds by itself,” Barrera de Grodski said. “Leon starts riding it around and like, flips it. He was like, ‘There’s no way we’re going to add a 500-pound espresso machine on the back of this.’”

Instead, they settled on serving pour-overs and iced coffee instead of espresso. The Barrera de Grodskis ran bikeCOFFEE for a year, selling outside of Fullsteam Brewery and Motorco just as Durham’s food-truck scene was exploding. They then started a Kickstarter for their first shop. The Kickstarter netted 640 backers, exceeding their goal, and got a city grant. The first location opened in 2013 in a former garage on Geer Street after help from neighbors and a lot of elbow grease.

“I miss that era… it was very bootstrappy, And we’re still bootstrapping it, I’m not going to lie,”  Barrera de Grodski said. “During that time, though, there was a different excitement in Durham. As soon as we opened the Geer Street location downtown, literally a year later all these development things started happening. There was a boom, Durham started getting all this attention and then all of a sudden all these investors are interested in changing up the scene.”

Barrera de Grodski knows that the city changing can also be labeled gentrification. Even in their early days, they tried to make sure they weren’t just catering to the burgeoning hipster-yuppie population.They would do tastings around town, in particular attempting to reach out to the Latino population in honor of Areli Barrera de Grodski’s heritage and the demographics of the neighborhood into which they and their business had moved.

“I tried to do a tasting in Spanish… that didn’t go so well,” she said. “People were just looking at us like, ‘What are you doing?’ The concept of having a tasting… also like, who are you? Even though we lived in the same apartment complex. They saw us, and they always saw us toting shit up and down the stairs, and they were all friendly, but when we invited them to come taste hot chocolate and coffee and tea… maybe like one or two people came.”

Cocoa Cinnamon has struggled with the same tensions, on a bigger scale, as the business grows. The Lakewood location was previously a “quinceañera hotspot,” and the storefronts around Cocoa Cinnamon have turned over rapidly.

“I know that in this neighborhood has changed drastically over the past two years. And I know that opening up a coffee shop is like the first sign of gentrification,” Barrera de Grodski said. “We’re aware of our role in that, and it’s really important to us to create as much of a positive impact as possible in the neighborhoods that we’re moving into, trying to undo that negative impact.”

With that in mind, Barrera de Grodski hired mostly Lakewood residents to work at the location, including some staff who speak mostly Spanish. The business pays a living wage, $13.35 an hour. The shop also accepts requests for donations of gift cards or drinks to support Durham non-profit work, which they distribute by committee once a month.

Meanwhile, the business continues to grow. The couple’s newest project is 4th Dimension Coffee, which supplies the cafes and others nationwide with roasted coffee beans. The Barrera de Grodskis trade off responsibilities every so often, so Areli is mostly in charge of 4th Dimension, while Leon manages the shops. The name 4th Dimension is confusing, but Barrera de Grodski notes that they chose a different name so people would understand the coffee isn’t cocoa or cinnamon flavored.

“Leon and I just talked about that this morning. We have our deepest conversations right when we wake up,” Barrera de Grodski said. “He had this dream about how to get people to realize that 4th Dimension Coffee is Cocoa Cinnamon. The reason we named our roastery 4th Dimension is because it’s our approach to coffee. It’s inspired by the Dada movement and surrealism, in terms of being able to see something from different perspectives and different points of view, and needing the information of other things to get the whole picture.”

The whole picture of Cocoa Cinnamon, then, is something like one part world history project, one part art project, and a lot of coffee with a rose-petal garnish—optional, but recommended.

Photo at top by Katie Nelson.