Home » How a Durham taxi driver survives in the age of Uber and Lyft: personal service 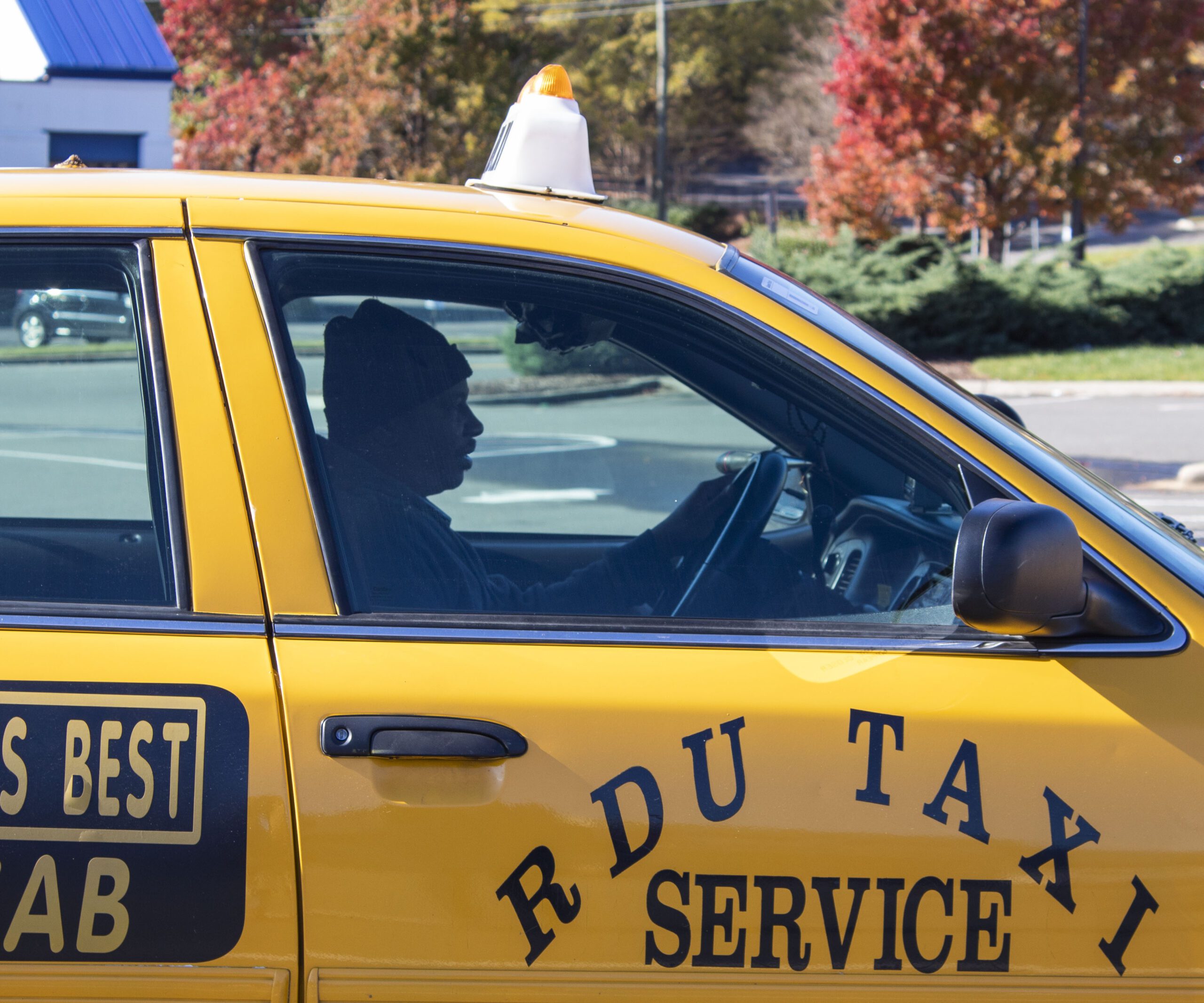 How a Durham taxi driver survives in the age of Uber and Lyft: personal service

It’s 9:13 a.m., and Ashraf Yousif, 43, is parked on Chapel Hill Road in Durham’s Best Cab Co.’s taxi #100. After an hour of waiting, he gets a request on his phone from an address he immediately recognizes. A student at Jordan High School. “He probably missed the bus,” he says.

Ash, as he prefers to go by, has been working as a taxi driver in Durham since 2005, after he immigrated from Sudan in 2004. He loves being part of people’s lives, a member of their community.

“You know everybody, find out everything. Who is pregnant, where people are traveling,” he says with a smile as we pull up to the rider’s address seven minutes later. A young man wearing a bright blue Duke hoodie and a backpack steps out—sure enough, he is the high schooler late for class that Ash had expected. He knows the boy’s parents, (“They’re Yemeni.”) and knows that they prefer their son take rides from a driver they trust, rather than, say, call an Uber.

This may be how the taxi business can survive in the age of Uber and Lyft.

Like other taxi companies, Durham’s Best Cab Co. has suffered from the rising popularity of ride-share apps. In the last five years, the company has gone from having over 60 taxi cabs to 31, and had to create their own app for calling and scheduling rides in order to keep up with the technological culture shift. Cab companies like Durham’s Best have found their niche by providing personal service to populations that desire special attention, such as immigrant families and young teens.

Today, prospects for the taxi industry across the country are bleak, but Ash’s dedication to his local immigrant community have allowed him to maintain success as a driver in Durham even after a few difficult years.

In order to stay in business, the company also had to take more serious measures to cut costs and stay afloat. “For two weeks, we were about to close,” Ash said, but then they outsourced their dispatcher system in 2015 and ended up saving thousands of dollars per month. Customers like the Jordan High student make survival possible.

A shift in customer demographics

Taxis still have unique appeal for families and seniors, largely because these groups tend to be more cautious about who they get into a car with.

“If you need to send your kids to school, or if you’re traveling somewhere and leaving your house empty for two weeks, you want to be in the car with someone you know you can trust, because you never know what can happen,” Ash says.

Since Uber launched its first smartphone app in 2010 (then named UberCab), there have been questions raised about how well the company can guarantee safety for its drivers and riders. The company’s image has been hurt by incidents of sexual harassment, drunk customers, and even scamming by drivers abusing the system. Ash and Durham’s Best say they offer a safe and friendly alternative for customers who might be particularly worried about their safety.

Uber has been a classic “disrupter” to the taxi business. Its presence in cities around the U.S. resulted in a fall in income of around 10 percent among taxi drivers and chauffeurs, though it has had a worse impact in certain locations. Los Angeles saw Uber and its younger competitor Lyft “deal a swift, brutal blow to the Los Angeles taxi industry.”

Ash, by catering to late-snoozing high school students, immigrant families, and cautious seniors, seems to be a survivor.

He has a wife and two young boys, and just got an IT certification as a systems administrator from My Computer Career, a computer training school in Raleigh. He says he got the highest grade point average in his class, and also had perfect attendance.

Back in Sudan, he obtained a law degree, and though he misses the practice he knows he will never be able to work as a lawyer in America because of the language barrier and difference in legal systems. He likes being a taxi driver, especially because of the flexibility it gives him and his family, since he can adapt his schedule to ensure that someone is always home to care for the kids.

He works every day of the week, but he spends a lot of that time in parking lots, waiting. It’s now 9:45 a.m., and he’s in another lot after having dropped off the Jordan student.

Not just a company, but a community of immigrants

Durham’s Best Cab Co. has its roots in Sudan. Most drivers and shareholders are also Sudanese, as the company was founded in 1999 by a group of immigrants from the North-African country who were working for ABC Cab Company and decided to start their own taxi service.

Ash belongs to a wave of Sudanese immigrants that poured into the United States between 2000 and 2010. The company’s founders arrived during an earlier surge between 1990 and 2000, when the state’s foreign-born population more than tripled.

Ash says Arab communities tend to be tight-knit and supportive, so it was natural place to start working at Durham’s Best shortly after he moved to North Carolina with his family.

Now, he is one of the company’s 31 shareholders, 15 of which are also drivers. If they are not from Sudan, they’re from Egypt, Morocco, or Syria. “The cultures are all so close. There are differences but it still feels like we are all at home, with the same traditions, the same religion.”

Ash is happy knowing that his customers trust him. They could be paying less for Uber but will pay the extra few dollars as long as he’s in the driver’s seat.

“This city is beautiful,” he says, looking the windshield at the color-changing trees. It is a chilly Friday in Durham, but the sun has emerged after several days of rain, and only a few slim clouds line the bottom of the bright blue sky.

He doesn’t seem to mind that his shift has been going for two hours, and he has only given one 10-minute ride that earned him less than twenty dollars. He says that Fridays are always particularly slow, but business picks up when it’s raining, when it’s extremely cold, or whenever there’s an event or festival.

Still, for all of its waiting and uncertainty, he loves this job. He does it because to him, Durham’s Best Cab Co. “is like a family,” and he is a valued member of that family, trusted with ensuring customers’ safety and comfort, assuring they make it to class – or wherever – on time.

At 10:52 a.m., Ash gets another ride request. He doesn’t recognize the address this time, but he knows how to get there.