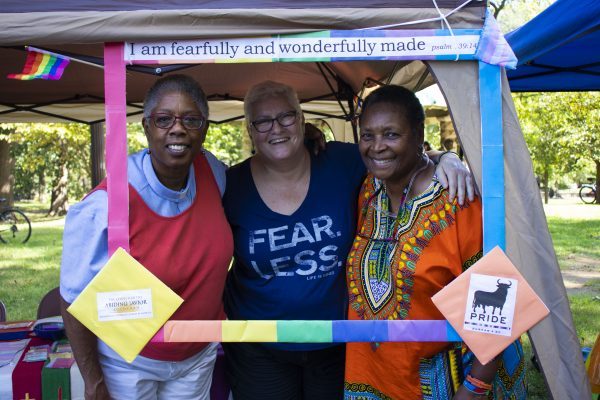 Hundreds of people turned out for Pride: Durham, NC on Saturday, transforming Duke University’s East Campus and nearby streets into a celebration of the Triangle’s LGBTQ community.

Pride events have brought together members of the LGBTQ community since 1981 after a group of sunbathers was attacked at the Little River in Durham. After Ronald Antonevitch, one of the victims, died from his injuries, demonstrations began in front of the Durham County Courthouse.

This year, The LGBTQ Center of Durham took the lead for the annual event. The group said the event seeks “to continue the legacy and grow toward inclusion of all peoples” as a celebration for years to come.

Top photo from left to right: Pastor Margaret, and members Kelly Bowers and Linda Warren of Church of the Abiding Savior, Lutheran Church. This is the church’s first year hosting a table at Pride: Durham. “We’re offering something that other (churches) are not offering communion. There are people in this community who have stepped away from or who have not been welcome in the church for many years, and they need communion too,” said Warren.

Miguel Torres, a city worker and recent transplant to Durham, was encouraged by his friend to attend his first Pride.

“It’s not that I just came out or anything. I’ve just never been to one,” said Torres.

Members of Duke University’s Center for Gender and Sexual Diversity celebrate Pride with their own parade float.

The parade and festival attracted people of all ages.

Dancers of the American Dance Festival took part in the parade.

Avereigh, 14, and Miles, 15, have attended two and four Pride festivals, respectively. “It’s a fun and safe space,” said Avereigh. “All of my friends are here,” said Miles.