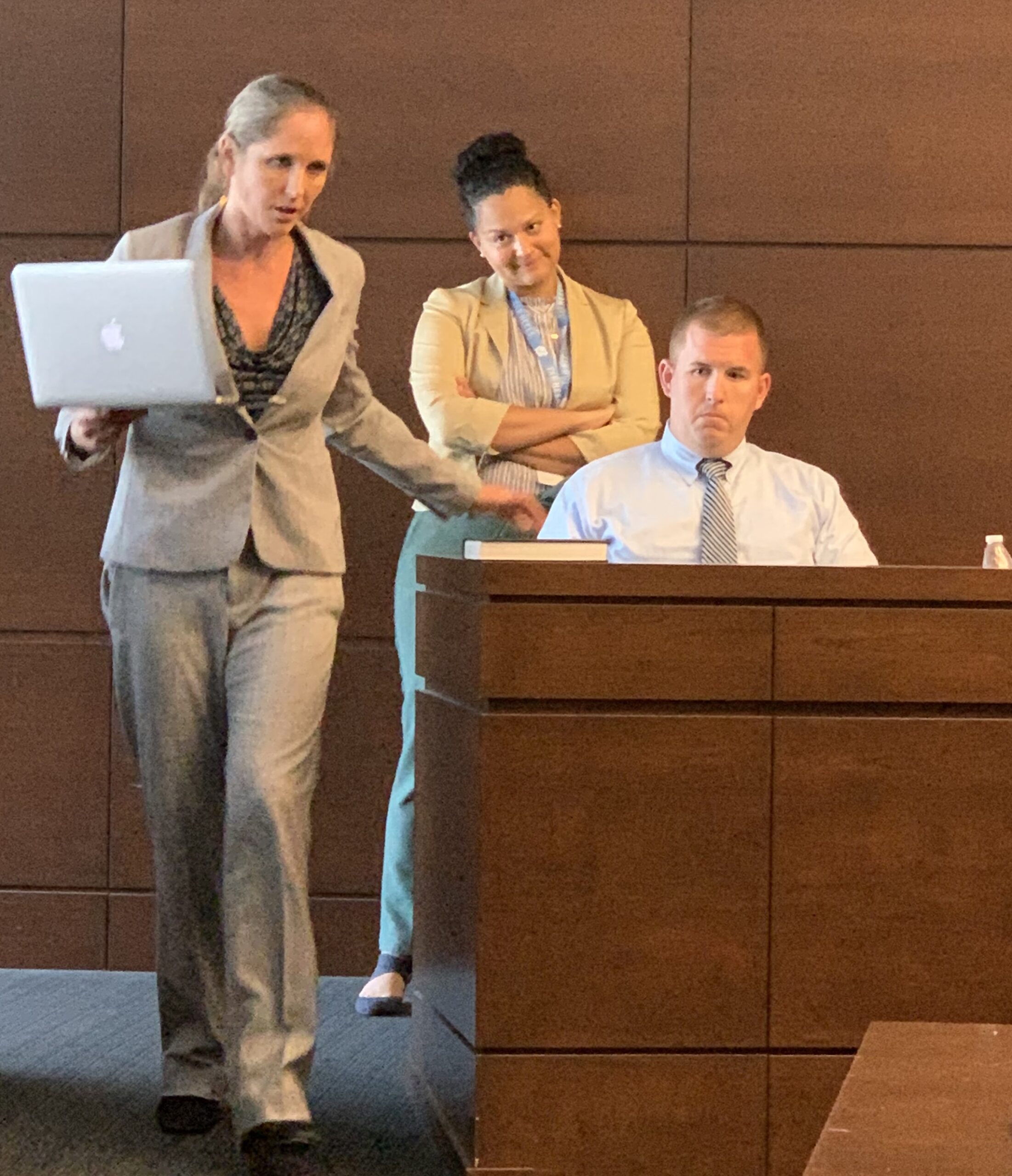 On Day 2 of Bishop hearing, lawyers spar over search warrants

The second day of a hearing in the case of Alexander Bishop, a 17-year-old boy accused of killing his father with a dog leash, was a battle over search warrants.

Prosecutors and Bishop’s attorney sparred over the warrants and the evidence they provided, accusing each other of “fishing expeditions.”

Allyn Sharp, Bishop’s attorney, said some evidence should be suppressed because of misconduct by the lead investigator, Tony Huelsman.

But prosecutor Beth Hopkins Thomas said there was no proof Huelsman was intentionally misleading when he sought the warrants.

“The claims here are incredibly opaque and getting into semantics instead of getting into substantive material issues,” Hopkins Thomas said of Sharp’s arguments.

Late in the day, Sharp noted that Huelsman had executed about 22 search warrants and asked him to explain what criminal evidence he’d uncovered.

Hopkins Thomas was quick to object.

“Your honor, it’s a fishing expedition,” Hopkins Thomas said. “She is trying to get our lead investigator to lay out his entire testimony before the trial.”

As in the first day of the hearing, Sharp played videos from April 18, 2018, when officers were called to the Bishop home in exclusive Hope Valley. In one video, Alexander’s mother Sharon recounts calls with her son, noting that the first one had connection problems.  Sharp raised doubts about the calls because of the connectivity problems, which Huelsman failed to mention in his search warrant. “Isn’t it true that you didn’t include anything about that because you were afraid that would discredit the statement that you were claiming Alexander made to his mother?” Sharpe asked.

Sharp tried to poke holes in Huelsman’s account, suggesting that he withheld details to bolster his case. She said he conveniently ignored discrepancies about the location of the leash and how it was wrapped around William Bishop’s body.

She emphasized there were conflicting statements about the location of the leash on William Bishop’s arms. In Huelsman’s search warrant application, he included a statement from an anonymous friend of William Bishop who said Bishop had severe nerve damage and reduced mobility in his right arm. But she said Huelsman did not include body camera footage of Alexander telling officers the same detail, which would have bolstered his explanation that the dog caused the strangulation.

Sharp repeatedly challenged Huelsman’s contention that marks on William Bishop’s neck indicated he’d been strangled by Alexander. She said evidence suggested it was possible the marks were caused by the dog pulling the leash.

But Huelsman said, “I’m not sure a dog on a leash could do that damage.”

The search warrants and the evidence used to justify them were the focus of Thursday’s hearing.

One of Huelsman’s warrants cited “suspicious” web history including searches for “how to calculate the value of an estate, the value of the price of gold per ounce, and how to transfer bank accounts after death,” Sharp said in the motion. She said Huelsman purposely deleted a sentence that showed these searches were made after William Bishop, his father, died.

On the stand, Huelsman said he didn’t have a particular reason for deleting the sentence, saying it was common to make edits. Later in questioning, he said he probably got rid of one of the sentences because they “kind of say the same thing.”

“Investigator Huelsman has been picking and choosing what supports his suspicions while leaving out the investigative work he has done that has proven those things to be false,” Sharp said earlier.

Sharp called it “a fishing expedition. These are general warrants.”

Sitting beside Hopkins Thomas, Michael Wallace, head of the Homicide and Violent Crimes team for the Durham County District Attorney’s Office, argued Sharp was really the one with the rod and reel in trying to get the evidence dismissed. Her arguments were really the ones that were false, misleading and disregarding the truth, Wallace said.

“What we’re having right now is a fishing expedition,” Wallace said.

The lawyers also began discussing gold bars that had been listed as “missing” to justify search warrants. After obtaining Alexander Bishop’s cell phone search history that showed him apparently searching for the price of gold, Huelsman said investigators became interested in the location of the bars.

But in fact William Bishop had sold the gold to a Florida coin dealer and police knew or should have known. Sharp argued in the motion that using the purchase order as justification for the search warrant was “intentionally false and/or reckless to the truth.”

On the stand, Huelsman said later in his investigation he found that there are about 50 separate ounces of gold still unaccounted for.

The sparring turned trivial at times.

Hopkins Thomas got tripped up on a name and laughed during Huelsman’s testimony. Sharp objected.

“I was not aware that I laughed,” Hopkins Thomas said.

The hearing came a day after a motion to suppress other evidence was dismissed. Hudson still needs to address other motions, one requesting electronic devices be returned to Bishop and one requesting the full case file. The hearing will resume on Monday.

In photo above, Bishop’s attorney, Allyn Sharp, seen with her laptop, sparred with prosecutor Beth Hopkins Thomas, center, when lead investigator Tony Huelsman was on the witness stand. Photo by Bill Adair | The 9th Street Journal

Clarification: An earlier version of this article contained a description of a video police interview with Sharon Bishop. The meaning of her comments in that video is unclear, so we have removed that passage.