Home » A Durham moment: ‘Let’s get the birds’ (They’re from Butterball.) 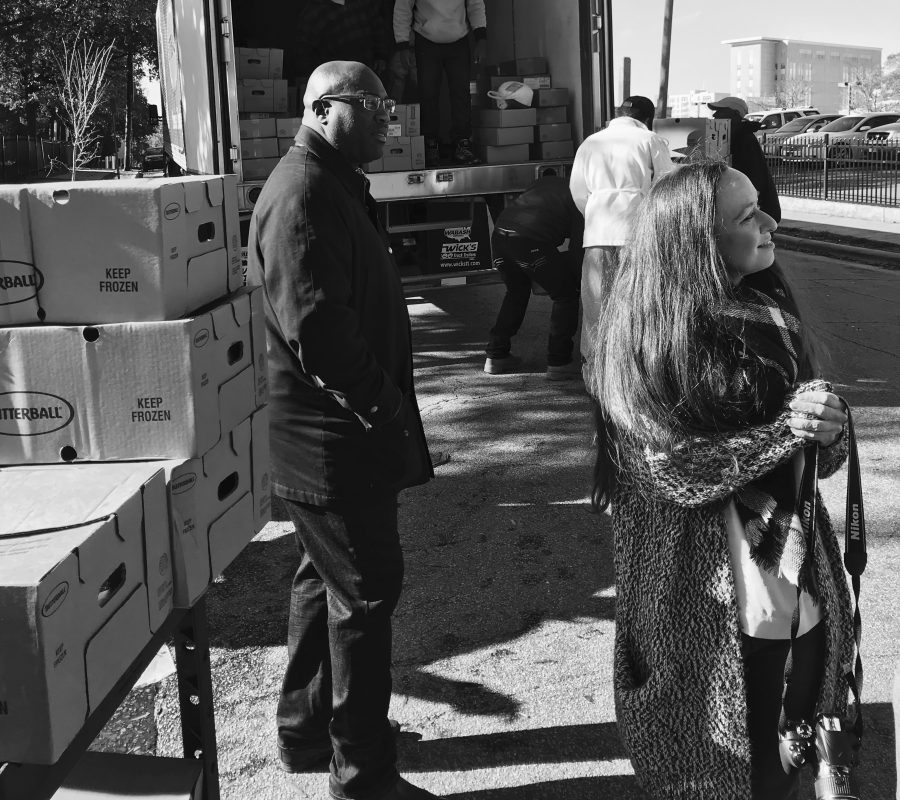 A Durham moment: ‘Let’s get the birds’ (They’re from Butterball.)

STORY AND PHOTOS BY BEN LEONARD

Standing in front of a bright blue Butterball truck, Mark-Anthony Middleton declares that Durham doesn’t measure its greatness by the size of its buildings, the cuisine of its restaurants, or who’s playing at DPAC.

What matters, the City Council member says, is how it treats the most vulnerable residents.

Outside Urban Ministries, near some of the city’s public housing, Middleton is presenting 200 turkeys to organizations that feed the hungry. Seventy-five of them and 345 pounds of sandwich meat will go to Urban Ministries.

“Let’s get the birds,” says Middleton, vapor coming out of his mouth.

Less than a week before Thanksgiving, Middleton tells the small gaggle of reporters and onlookers that nearly 17 percent of Durham residents live in “food insecurity.” More than a dozen onlookers dressed in ragged clothing across the street listen intently.

Middleton then reads a proclamation from Mayor Steve Schewel, declaring Nov. 16 to be “Butterball LLC Triangle Donations Day” in Durham. He warns that if he slurs a little, it’s because of the cold.

Without slurring, he proclaims that Butterball, the nation’s largest turkey producer, makes more than one billion pounds of “healthy, wholesome” turkey per year.

“We own this holiday,” says Butterball representative Ron Tomaszewski, vice president of human resources. “To be recognized specifically for it is outstanding.”

There are three pallets of boxed turkeys in the back of the refrigerated truck. (Did we mention the turkeys are Butterballs?) Volunteers heave and push the cardboard boxes to the edge and load them in carts.

Betty Finoh, a social worker, loads one of the carts with frosty turkeys.

With the help of two other people, she pushes the cart up the curb, but it gets caught in a rut and nearly tips over. They rescue it and push it a few feet further to their car.

Donning a bright blue Carolina Panthers hat and sparkling earrings, Finoh loads the back seat of a sedan with 30 turkeys. There are so many she’ll have trouble looking back through the rear view mirror.

“This is great,” Finoh says. “We can put food on the table for people who can’t afford it.”