When you arrive at 515 W Pettigrew St., you’re greeted by a glass building brought to life by the constant stream of travelers flowing in and out.

Overlooking the multistory office buildings and the red brick warehouses of the city, the station acts as a central location for local commuters to access affordable and (ideally) reliable transportation. Yet any daily commuter knows the structural failings of Durham Station Transit Center. A 2021 city report states that the station has “insufficient infrastructure and resources that result in 20% of buses not showing up on time and up to an hour waiting between buses.”

However, change is on the horizon. Beginning in 2024, the City of Durham will embark on a $13.5 million dollar renovation to the station.

After hearing that number, you might wonder where exactly all that money is headed. The most recent proposed addition to the project—a professional services contract with the architecture firm, Perkins & Will—takes $1.5 million of the grand total. The contract was unanimously approved by the Durham City Council on December 5. Other previously approved notable expenditures include over $10.9 million dollars for construction costs, $247,550 in administrative tasks, and $231,100 in public art. 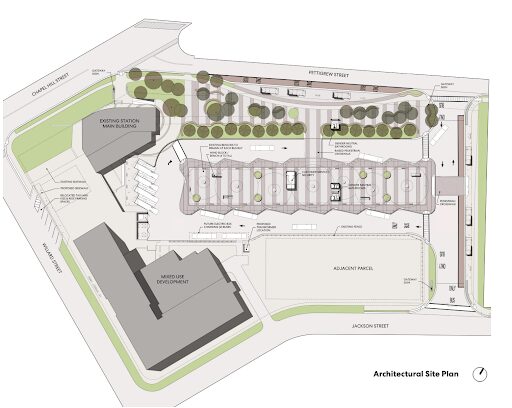 “In order for a city to be a truly great metropolis, at some point it has to cross the threshold where you can negotiate the city without a car….,” Mark-Anthony Middleton, the city’s mayor pro tempore, said about the project. “The ability to bolster our transit system… is an important step towards Durham’s story of being an emergent city.”

The majority of funding for the project comes from a Federal Transit Authority grant, which provides the city with $10.8 million towards the construction effort. The grant requires a 20% local match, meaning that the City of Durham will provide $2.7 million to the project. According to Amy Blalock, a spokesperson for the city, the local match will be funded primarily by the ½ cent sales tax for transit approved by Durham County voters in 2011.

In early 2022, when discussing the impact of this federal funding, Mayor Elaine O’Neal stated, “With this federal funding, we can improve safety and customer comfort for the thousands of riders who use Durham Station every day while also expanding capacity to run more buses, including larger articulated buses used for Bus Rapid Transit.” The new transit station is designed to be more efficient and more consistently reliable, with a higher capacity for passengers.

In order to gauge public support for this project, the design team consulted riders, operations staff, and the broader community. In 2011, the Freelon Group surveyed riders on what improvements would benefit their transportation experience. This survey, in conjunction with input from the Durham Station Transit Center, GoTriangle, GoDurham, the Perkins & Will design team, influenced the ultimate project design, Blalock said.

So, now that you have the grand vision for the new and improved rider experience, when can you expect to see construction wrapped up?

After 16 months of design work from Perkins & Will and 12 months of on-the-ground construction, commuters can expect to experience the new facilities in full by early 2025.

Above: Concept images of the planned Durham Station renovation, as provided to the city by the design firm Perkins & Will.