Home » The therapist who baa-aas at your problems 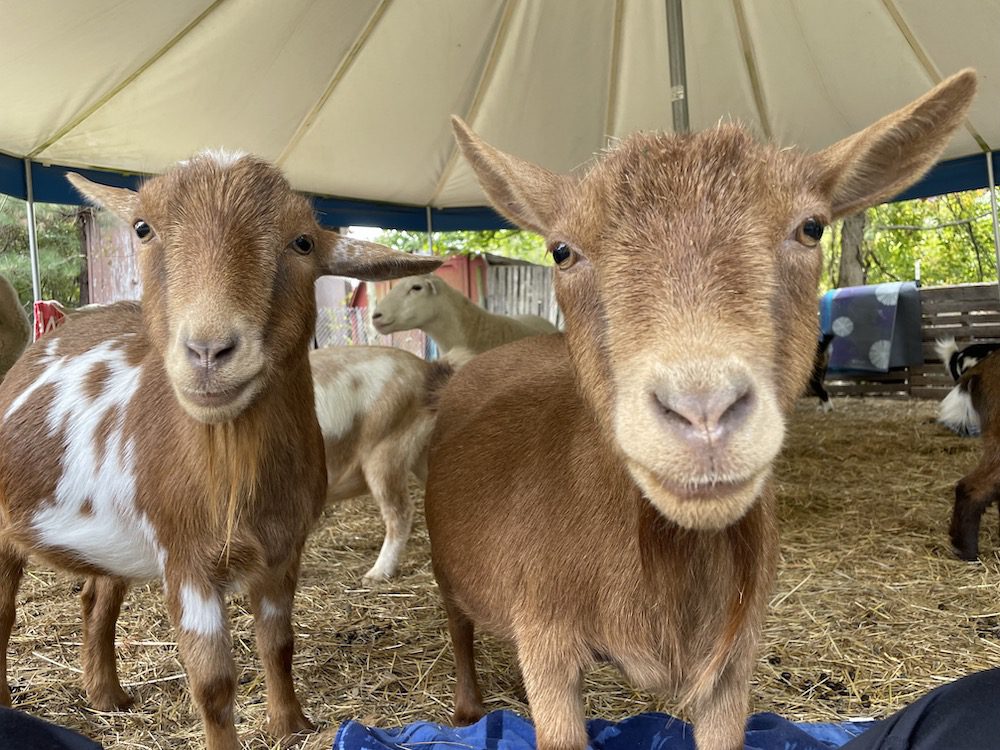 The therapist who baa-aas at your problems

On a recent Sunday morning, I went to therapy feeling optimistic and left smelling like goat pee.

To get my therapy, I drove 25 minutes from Duke’s campus to a dead-end road near Falls Lake. I parked and followed the instructions in an email to remove my necklace and earrings.

I was there for “Goat and Horse Snuggles 101,” a class that would help me “learn best techniques for animal scratches, massage, and pets while releasing stress,” according to the Avery Family Farm website. After I got past the dogs and ducks that seemed to be guarding the place, I finally reached the main event: 21 snuggling Nigerian dwarf goats.

It was an odd setting for therapy. I joined 11 other people in a small, hay-covered pen where we laid our colorful, worn-out towels. I looked around to find that I was the only solo participant. There were two girls who looked about 17, a beanie-wearing Gen Z couple, a woman from North Carolina and another with a thick, eastern European accent, and a family of five with a 5-year-old girl.

Amanda Avery, the owner of the farm, told us what to expect for the next hour and a half. She instructed us on how to pet our new friends, including the preferred scratching spots for the goats and sheep. “They cannot be potty trained, they are gonna go to the bathroom at some point during the class,” she warned. At her side, her Sunday volunteer, Chandra Green, smiled and nodded.

Though goat yoga has become somewhat of a cultural phenomenon in the past few years, Avery Family Farm wasn’t just following along with the trend when it started offering classes. “I had gone through some pretty intense things,” said Avery.

She experienced depression and anxiety during her teaching career that reached its peak after the death of her father and then her stepfather a year and a half later. At one point, she couldn’t be amongst a small group of people without having a panic attack.

One morning, she decided to meditate in the goat pen, and felt a sudden calm.

“Animals have always been very therapeutic for me,” she said.

She began to invite friends to join her for goat-infused meditations. At that point, the humble farm took a turn, “more like petting-zoo type stuff.”

It wasn’t until a friend sent her a video of the new fad, “goat yoga,” that Avery decided to invite yoga instructors to lead classes with her clan of goats, making Avery Family Farm the first goat yoga spot in North Carolina. “It kinda blew up from there.”

Avery gives the goats individual attention. She made a point to have Green, the volunteer, introduce each one by name, calling attention to their unique personalities.

Lessie loves three things: bright colors, and blonde or curly hair. So when the mother of the 5-year-old revealed her short blonde ringlets that had been partially dyed hot pink, the mom was warned to tie it back.

When Green tried to find Shadow for his introduction, he was found rubbing his jet-black belly against the wire fence in desperate search of itch relief. Johnny Cash was nearby, a tall blue-eyed beauty towering over his much shorter, much rounder mother, Bonnie. She did her snuggling on her own but made sure to check in on her handsome son every once in a while.

Finally, Green introduced Cookie, the matriarch – a black and white patched Nigerian dwarf, and the apparent leader of the band. Each time Green introduced a goat, she approached them and gave them a scratch.

Green, a weekday insurance worker and a weekend goat enthusiast, has been volunteering at the farm for almost a year. After hours of Zoom meetings and schlepping her kids to school, she wanted to volunteer at the farm to do something for herself. She said the value of goat therapy is the ability to pause and disconnect.

“There’s just such a mindset everywhere of ‘go-go-go’… and this is literally the opposite of that,” she said. “Everybody leaves with a great attitude and, just a new appreciation for animals, nature, life, slowing down.” She paused, and then repeated, “slowing down.”

The volunteers help, but Avery, 41, born and raised in North Carolina, is clearly in charge. She runs the marketing, social media, finances, accounting and event planning. Her strength is notable because she came to the goats in her own moment of desperation.

Avery taught in public schools and tutored privately before she moved into “farming and healing.” She believes animals serve as the perfect alternative to traditional therapy.

“What I think all the animals do is they just let you just be you. There’s no agenda. There’s no like, they like you or don’t like you because of your politics or your beliefs or the color of your hair.”

To Avery, they heal people by reconnecting them to nature. She emphasized, both during class and in our conversation, that her goats are not trained with food, only with love.

When I arrived, I felt like a clueless city slicker. Had my New York City upbringing given me so little exposure to the natural world that I had paid $20 dollars to pet goats – and to be warned that they do, in fact, poop?

But I got comfortable. The goats chewed my ear, gnawed my hair, and nudged each other to sit in my lap. I laughed when one of them coughed a human-like cough. Nutmeg, who I had been scratching for a few minutes, slowly crawled into my lap and relaxed into a comfortable ball.

I felt loved. There was so much action, so much comedy, and so many… smells, that I found my stress melted away.