Home » “Let’s dance!” – Learning to salsa on a Friday night in Durham 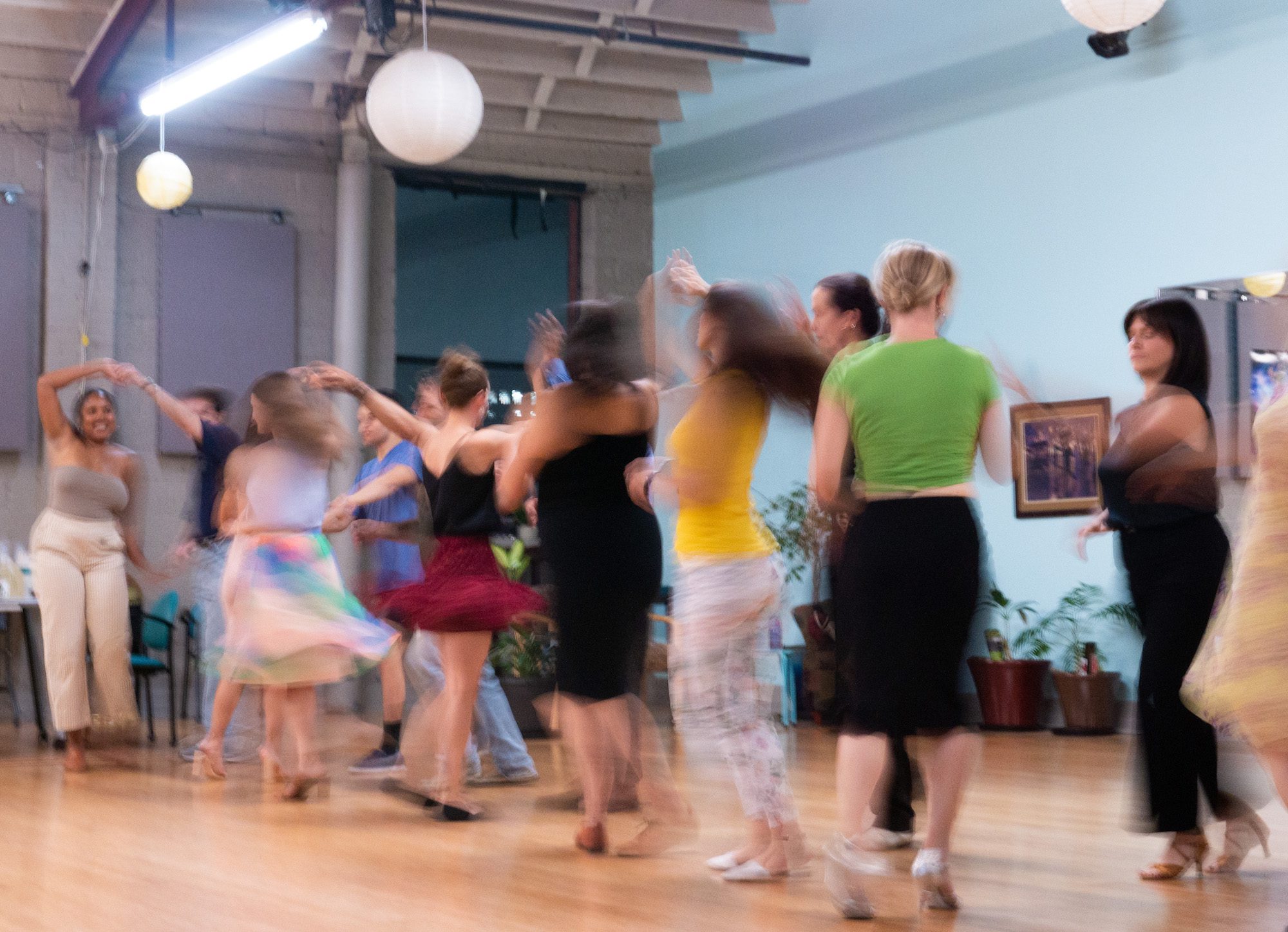 “Let’s dance!” – Learning to salsa on a Friday night in Durham

It is the first Friday of the month at Durham’s Arthur Murray Dance Studio – Salsa Social night –  and couples are twirling and prancing to the beat on the main dance floor. But around the corner, away from the group, Liza Salmon dances alone, barefoot. Salsa dancing isn’t hard, says Salmon, a baker by day and aspiring dancer by night. She says the key is to “let the music flow inside of you.”

The spicy dancing in the Arthur Murray studio seems a bit out of place in this neighborhood of warehouses and garages that have been converted to bars and restaurants. Across from the studio, crowds of college kids stream into (and stumble out of) Boxcar Bar + Arcade for the weekly “Fireball Friday” deal, looking to drown their sorrows in cinnamon shots. Something, though, has convinced the salsa crowd to forgo the bars and spend a weekend night learning the tango and bachata.

Arthur Murray, traditionally focused on ballroom dance, might invoke images of lonely old ladies looking to recapture their youth. Tonight’s dancers, however, are diverse in age and gender. Many of them are professional workers in their 30’s. Of the roughly two dozen people in the room, most are white of skin (although two are purple of hair), with a few people of color sprinkled throughout. Some are here on dates, others came alone. Salmon brought a male friend in hopes of dragging him out of his comfort zone. For now, he stands at the refreshment table by himself.

The monthly Salsa Social is open to anyone who pays the $10 cover. The participants get in the spirit with flowery shirts and dancing heels for an hour-long group lesson followed by unstructured dancing until midnight.

Maria Espinosa Spencer strides around the room in a black high-low dress playing host to newcomers and returning dance students with chips and boxed wine. Maria and Joel Spencer, Maria’s partner in business, marriage, and dance, opened the studio about a year and a half ago while Durham was still reeling from the Covid pandemic.

Maria and Joel have been with Arthur Murray for 18 and 14 years, respectively. After her introduction to the chain as a student in Kentucky, Maria got hired as an instructor and trained in Chicago before settling in Durham to be closer to her family. As the only instructors at the studio, they sometimes wish they could find another set of hands. “Most dance studios are small businesses. It’s hard to compete with places that can afford health insurance.”

Arthur Murray claims to be one of the oldest franchises in America. According to the company website, Arthur was a famous instructor and dancer in the early 1900s. After his retirement in the 60s, the modern company’s franchise model took hold, with studios opening in places such as Dubai, Taipei, and Tokyo.

Since the pandemic, Maria has noticed her clientele getting younger. “Covid put a hold on so many weddings and now everyone’s trying to get married.” Couples take a few lessons to impress their guests with that perfect first dance. Maria and Joel teach as many as 15 lessons a day and are looking to build a back porch on the studio to help people feel comfortable in close proximity with strangers and their germs.

To kick off the lesson, Joel Spencer, dressed in black, sweeps onto the floor. The lights of the studio glint off his earrings and his “S” (for Superman) belt buckle as he claps his hands and shouts, “Let’s dance! Come on!”

At first the only sound is Joel’s loud counting as he walks his students through the basic steps of salsa. He takes command of the studio and leads by example, striding around the room on slender legs.

“Let’s pick up one foot – it doesn’t matter which one – and then put it back down – and then pick up the other foot and come back down.” In a matter of seconds, Joel has his students marching in place.

Seated on the side of the dance floor, Anne and Joe Reese patiently await their cue. They are probably the most senior and experienced couple in the room. They smile politely, careful not to judge the newcomers too harshly.

The Spencers and the Reeses are so good they compete in regional and national Arthur Murray events. Loud posters for these line the walls of the Durham studio, highlighting events such as Charlotte’s “21st Annual Southern Summer Showcase” and Virginia Beach’s “Beach Blanket Bingo”– The BEACH PARTY gang goes DANCING!!!

Joel teaches one sequence of the salsa dance, then commands the students to rotate to a new partner. “Introduce yourselves if you haven’t already!”, he says before immediately making that impossible by launching into a rapid-fire explanation of the next step.

As the lesson continues, D.J. and dance aficionado Jack Wolf strolls into the studio. The colored lights illuminate his white fedora. There is an air of wisdom about him, with white hair flowing out beneath his hat.

“I know everything about the salsa scene,” he says matter of factly, conjuring a white business card with the deftness of a magician finding a quarter behind an ear. He says his website “lists every dance in the Triangle of every kind.” At one point, he stops mid-sentence and jogs away to hit play on “Betece” a song that Wikipedia describes as part of a project to “unite New York-based salsa musicians with Senegalese vocalists.”

“It’s the music that moves you, that’s why I LOVE salsa!” Wolf says.

A dancer at heart, Wolf can’t resist the pull of his own playlists. He leaves the D.J. stand and clutches his partner close. This is not his first dance of the week, and it won’t be his last.

“You can find a dance every night of the week except Monday.”

By the end of the lesson, Joel has torn down any remaining social barriers. How could you be nervous to speak to someone after practicing your under-arm single spin together? How could you feel alone while a man named Wolf queues up dozens of dance hits?

The night is coming to a close. Salmon’s friend has been dragged to the floor several times by eager partners. Salmon has been dispensing her “feel the music” philosophy to anyone who will listen.

Anne and Joe Reese watch attentively for a few songs until Wolf puts on a Cuban cha cha. The Reeses, finally hearing the beat they’ve been waiting for, rise to their feet and glide to a corner of the floor. “This is their jam,” says one of the regulars.

They orbit each other with straight spines and steps rehearsed in the two decades since they met at an Arthur Murray in 2001. Having danced their way across the country, they are now the undisputed royalty of the Durham studio.

Just as Maria predicted, a man drawn by Wolf’s music wanders into the studio and pays the $10 cover.

At top of story, dancers twirl during the lesson. Photo by Kulsoom Rizavi – The 9th Street Journal