Home » A judge in twilight: impartiality, partisanship, and a life on the bench 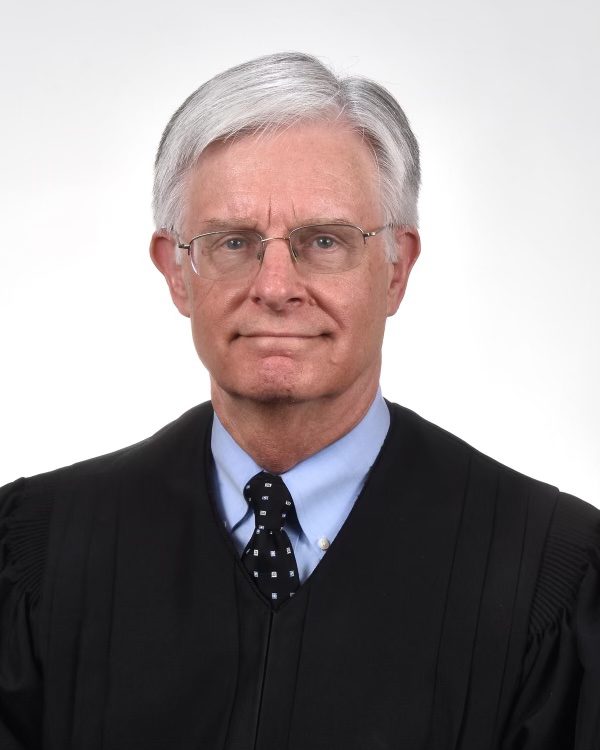 A judge in twilight: impartiality, partisanship, and a life on the bench

Judge James Hill looks at home sitting on the bench wedged in the dim corner of Courtroom 5A in the Durham County Courthouse. A gleaming silver medallion emblazoned with the North Carolina state seal and mounted to the wall gives the space an air of grandeur. But Hill’s warmth is palpable, even with the plastic shield that separates him from the rest of the courtroom.

On a Wednesday afternoon last October, a defense attorney explains that her client is prepared to fulfill his two-day jail sentence, “but doesn’t want to lose his job.”

The young man clasps his hands together and nervously explains that he is contracted to work an upcoming three-day shift but can’t report to his job on time if he is locked up.

“You could go to jail right now,” the silver-haired, bespectacled Hill says, with a southern drawl. “And I could let you out at 5:00 a.m.”

The defendant’s eyes widen with relief, as a muscular bailiff handcuffs him. This savviness has served Hill well since he was first elected to the Durham County Court in 2002.

For almost two decades, Hill, 71, was a fixture at the courthouse. But after losing his campaign for reelection in 2018, he now only comes to the courthouse occasionally as an “emergency” judge. Hill’s career is the story of a man who prided himself on his impartiality, only to suffer the consequences of a very public courtroom controversy – and  the arrival of partisan judicial elections.

After being elected as judge in a nonpartisan election in 2002, he faced no opposition for his seat on the bench in 2006, 2010, or 2014. In 2017, the North Carolina General Assembly put political parties on the ballot for District Court judicial elections.

The state legislature’s decision paved the way for a Democrat to challenge Hill in overwhelmingly blue Durham County. For the first time since 2002, voters saw that Hill was a Republican and that his opponent, Clayton Jones, a former public defender and assistant district attorney in Durham County, was a Democrat.

In the race, Hill’s experience and candor on the bench were liabilities. Jones garnered 76% of the vote, while Hill won only 24%.

Aside from the three years he spent in Alabama at Cumberland School of Law, Hill is a lifelong resident of Durham County. His road to the judiciary began when he decided he wanted to be a lawyer in 7th grade.

The self-described “little country boy” from Rougemont is the youngest of three, born to hard working parents who both had a 9th grade education.

“If you would have taken a blind look at my background, you would say that guy was never going to amount to much of anything,” Hill says.

He worked his way through school at the University of North Carolina at Chapel Hill as a laborer and carpenter, when he estimated that cost of attendance was $2,000 a year.

As a lawyer, Hill’s practice ranged from civil and juvenile cases to murder cases. It was good preparation for the rotating hats he would later wear as a District Court judge.

Before the Durham County Public Defender’s Office was established in 1990, private attorneys would sign up to represent those who could not afford a lawyer.

Hill “got on all the court-appointed lists,” as you did back then.

One of his first clients was a man with an IQ of 64, which generally indicates an intellectual disability. The man had relieved himself on the busy corner of Trinity Avenue and Mangum Street during peak morning hours and had been charged with indecent exposure.

Hill got the man off with a Prayer for Judgment Continued—a legal device that suspends a conviction even when defendants have been found guilty or have pled guilty. To this day, Hill considers it a win.

“He looks at people straight from eye to eye,” says Judge  Archie Smith, Clerk of Superior Court. “He doesn’t consider himself any better than anybody else.”

‘I didn’t start this race to lose’

After failing to score an appointment, Hill was eager for a spot on the Durham District Court bench. The Democratic primary went into a runoff.

“I didn’t start this race to lose,” he told The Herald Sun after the vote count.

Durham Mayor Elaine O’Neal, who was then a lawyer, beat Hill by some 1,100 votes in the low-turnout run-off.

“I didn’t leave the Democratic Party. It left me,” says Hill, who declines to say much more.

In 2001, the North Carolina legislature took political affiliation off the ballot for district court races. Hill ran again with the slogan “A judge Durham will be proud of.” He touted his 25 years of legal experience and his commitment to impartiality.

Hill lost the open primary, but ultimately clinched the judgeship by beating William A. Marsh III by a 12-point margin in November.

As for his status as a Republican, “at that time, not much was made of it,” Hill says.

To Hill, District Court is the “people’s court,” and he says he strove to run it as such. He fondly recalls bantering about construction-related technicalities with one defendant. He remembers everyone else in the courtroom being bewildered, thinking “What in the world are you talking about?”

“But I felt like that was good for me and him,” Hill says. “To let him know I knew what he was going through.”

Just a year into his courtship, Hill ruled that a North Carolina law imposing a $50.00 application fee to obtain a court-appointed lawyer was unconstitutional.

He was the first judge in the state to do so. Superior Court Judge Orlando Hudson affirmed Hill’s ruling. The North Carolina Supreme Court followed suit. He recalls this as one of his proudest rulings.

“I didn’t really think about political repercussions,” Hill says. “I just did what I thought was right.”

As a jurist, Hill presided over Mental Health Court in its infancy.  He also established and ran a truancy court—which creates legal penalties for excessive repeated unexcused school absence—for more than ten years at his middle-school alma mater, Carrington Middle School, until the idea fell out of favor with the prosecutor’s office.

The 2018 judicial election was unlike any Hill had faced before. The North Carolina General Assembly had just recently made judicial elections partisan again, and Hill would have to run as a Republican candidate in a deeply blue district.

In his last term, he also suffered a blow to his professional reputation.

Asked in a pre-election interview what decision made by the incumbent he most disagreed with, Jones, Hill’s opponent, cited a moment in Hill’s that stained his candidacy.

In a video viewed almost 20,000 times since its release by INDY Week in 2014, Hill lambasts an estranged couple at a custody hearing.

The nearly seven-minute clip from the conclusion of a two-day hearing shows Hill repeatedly calling RiShawna and Collin Morrison “idiots.”

“Y’all the one that crawled into bed and had sex and made that baby,” Hill tells them. “He didn’t ask to be born.”

When RiShawna protests Hill’s ruling for joint-custody, Hill rattles off jail sentences, what he calls “trip[s] to the Durham County Bed and Breakfast”: first 24 hours, then 48, then 72, all the way up to 30 days.

“I’m going to jail for being a good mother?” RiShawana asks as chaos erupts.

RiShawana flails against the deputy who comes to restrain her and manages to free herself from his bear hug when he tries to handcuff her. Hill exits as others in the audience enter the tussle.

By the end, nine deputies have entered the courtroom. RiShawna, who Hill now calls a “good parent,” was reportedly cut and bruised.

After INDY Week broke the story, Hill received a public reprimand from the state’s Supreme Court for his behavior during the case. It was a finding for a minor violation of the Code of Judicial Conduct. Only 14 public reprimands have been issued since 2015.

Despite the reprimand, the commission’s team lauded Hill for his “good reputation in the community,” above average Judicial Performance Evaluation—4.19 compared to 3.56—and cooperation in the investigation.

“My choice of words left something to be desired,” Hill says. “My goal in the hearing was to point out to them who the most important person in that hearing was, the child. What they were doing was hurting that child, who was innocent.”

During the 2018 race, Jones, a Democrat who called himself a proponent of “judicial activism,” brought Hill’s record into question, including the truancy courts. Jones said he would work to reduce the burden of fines and fees and expand pretrial release programs and drug and mental health courts.

“For 15 years, I just saw things—things that just didn’t sit right with me,” Jones said at a debate hosted by Kids Voting Durham. He referenced Hill’s habit of calling kids “babies” and his practice of shackling juveniles in court, which Hill claimed he did for the safety of the children.

Hill was unable to persuade Durham County voters to look past his affiliation with the Republican Party or the public reprimand. The even-keeled Jones cruised to victory with 76% of the vote.

Judge Nancy Gordon, a Democrat elected to the Durham County District Court four years after Hill, takes issue with the politicization of judgeships, and she respects Hill for his impartiality.

“[Hill] tried really hard to not let people manipulate him with [his personal beliefs],” Gordon says, “and you get points for that.”

Now, Hill only spends the occasional day in court, sometimes working alongside Jones. Otherwise, he goes on long morning walks, attends a prayer group on Tuesdays, and takes care of his grandson.

PHOTO ABOVE: Judge James Hill won three elections before being defeated in 2018, when Durham County compelled candidates for the bench to declare their political party.