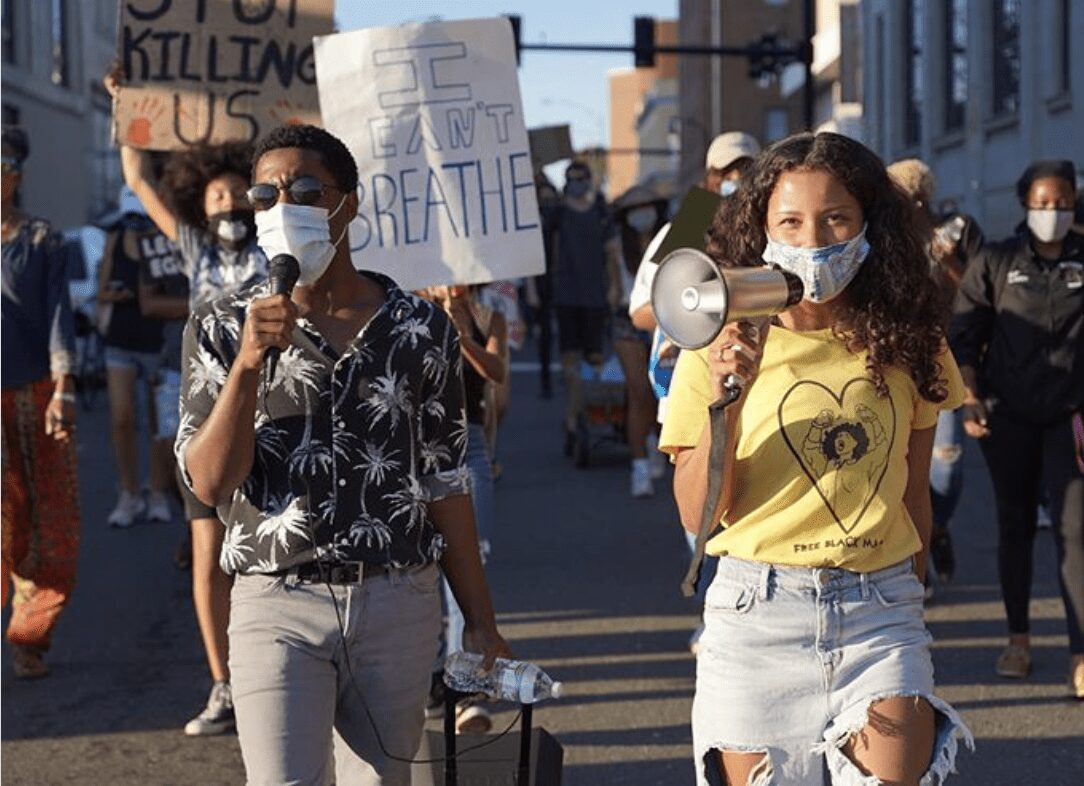 This is how gangs recruit students, school security and police officers told her and classmates at Lucas Middle School in northern Durham County. This is how long you will spend in jail if you sell Drug X, they said. Drug Y brings a longer sentence.

Dearing, a recent graduate of JD Clement Early College, wonders why the encounter wasn’t designed to inspire rather than promote fear. Say if a member of Project BUILD, a gang intervention program, talked to students. Or if her class was brought to a career fair to help motivate them at school.

“Wouldn’t that be more substantive than police officers talking to you about crime?” Dearing asked during an interview.

In the wake of the death of George Floyd, national conversations about police aggression, funding and training are everywhere. Yet, these are not new concerns for Dearing.

The 18-year-old has been pushing Durham Public Schools to rethink the need to employ law enforcement officers in public schools. It started when she and other students published a list of proposed improvements in 2019. With petitions and protest, recently she has promoted a complete abolition of school resource officers (SROs).

During her junior year at her magnet high school, Dearing joined the Youth Justice Project. That’s a Southern Coalition for Social Justice initiative that promotes equity for young people in education and the criminal justice system.

Through the Youth Justice Project, she and others invited students, administrators and SROs to a town hall forum on the topic of school safety in April 2019 at the W.G. Pearson Center. They named the forum with the acronym SRO, but instead it stood for “Students Reaching Out.”

The risk of over-aggressive policing is not an abstract issue for Dearing. SROs were not assigned to her high school, which is located on the campus of North Carolina Central University. But Dearing recalls watching some of these officers break up fights between students during football games at Hillside and Riverside high schools. Altercations sometimes ended with students escorted to the back of a patrol car or handcuffed at the scene, she said.

In Durham, 27 sheriff deputies work in middle and high schools in the district. The county spent $2.7 million dollars to fund 30 officers, three of which are not assigned to specific schools in the 2019-2020 budget, with the same amount recommended for 2020-2021.

The officers, who are armed, are there to enforce the law, provide delinquency prevention resources, and offer law-related guidance and counseling to students, according to Durham Public Schools.

After the town hall forum, the Youth Justice Project published a list of recommendations for school board members to consider. Items included increased transparency through a public data report about what SROs respond to, a student-friendly complaint process to report any concerns regarding SROs, and a redefined outline of what types of incidents a SRO should be involved in.

After seeing little change, Dearing has a new request.

“A year later, now we’re asking for just a complete defunding and end of relationship with the sheriff’s department,” she said.

From reform to abolition

Elijah King, a recent Riverside High School graduate, is Dearing’s  partner-in-action and biggest advocate. The pair met while working with Made in Durham, a non-profit that helps students enter the workforce after school.

In their collaborations, Dearing is Steve Jobs with big-picture ideas, while he is Steve Wozniak, fine tuning the details for operation, King says.

One big-picture action Dearing took recently was circulating a petition addressed to Superintendent Pascal Mubenga and Board of Education Chairman Mike Lee on Instagram. It asked Durham residents to sign in support of removing SROs from all schools and attracted over 2,000 likes and 3,000 comments from people ranging from Duke University students to Durham Public School parents.

“She’s a leader. She’s a great speaker. She knows all about how teamwork makes the dream work. She is ambitious. And that’s why I like working with her,” King said.

To promote her Instagram request, Dearing and others solicited comments supporting removing SROs ahead of the Board of Education work session on June 10. That generated 256 pages of written comments.

In response to all of this, Durham Public Schools published a statement on its website endorsing its SRO program and agreeing to conduct the impact assessment of the program by the end of the 2020-2021 school year, as the Youth Justice Project had requested last year.

“We would be happy to participate in a community forum to learn from our stakeholders and develop solutions to ensure the safety and security of our students,” the statement reads.

As the statement did not clarify who are stakeholders, Dearing, King, and others organized a  “March for Black Students” on June 13 to show them.

Organizing a march in a pandemic is not an easy feat. Aside from the tasks of contacting de-escalators, people assigned to diffuse any conflict, and medics to attend, she and co-organizers ensured people wore masks and used hand sanitizer.

Dearing led marchers half a mile from DPS headquarters to the sheriff’s department in a yellow shirt that read “free Black mamas” with a patterned fabric mask on. When holding the microphone to speak to the crowd, she, and other speakers wore a blue plastic glove as a cautionary measure.

Dearing is not letting adults dominate conversation about school policy. Instead, she is putting student voices at the center of her actions, said Katherine Shor, a former youth engagement coordinator at Made in Durham and a mentor to Dearing.

“To have youth be the leaders, the voices and the stakeholders of what happens in their schools that is a policy planning, organizing 101,” Shor said.

Lee said he hears Dearing’s requests. However, he said, he needs to better understand alternatives for SROs before he is willing to remove them from schools.

Although SROs mainly interact with students, they also handle external threats to the school, Lee stressed. That can range from disruptions related to parents’ custody battles over students or trespassers on school campuses.

Lee emphasized SROs protect not only 33,526 students in all Durham public schools but also 5,003 employees on school campuses. He fears if he cut SROs, he may have employees who will quit, he said.

“I need solutions to help assure the security of those 38,000 people in our buildings every day before I can make any kind of a decision,” he said.

Dearing and King are working on suggestions for SRO alternatives, which will include having people at schools trained in conflict resolution responses such as de-escalation and restorative justice. Next steps will include a youth summit to collect more student ideas. After that they will present a proposal to the county, the sheriff’s department and school board that King has been compiling.

The pair will keep working to build as much support as they can around their proposal before they both head separate ways in the fall. Dearing will enroll at Howard University; King will enter the University of North Carolina at Greensboro.

“I can speak as a former student, but now I kind of have to take a step back and pass the baton,” she said.