Home » ‘You don’t know what’s behind the door’: Inside Durham’s evictions 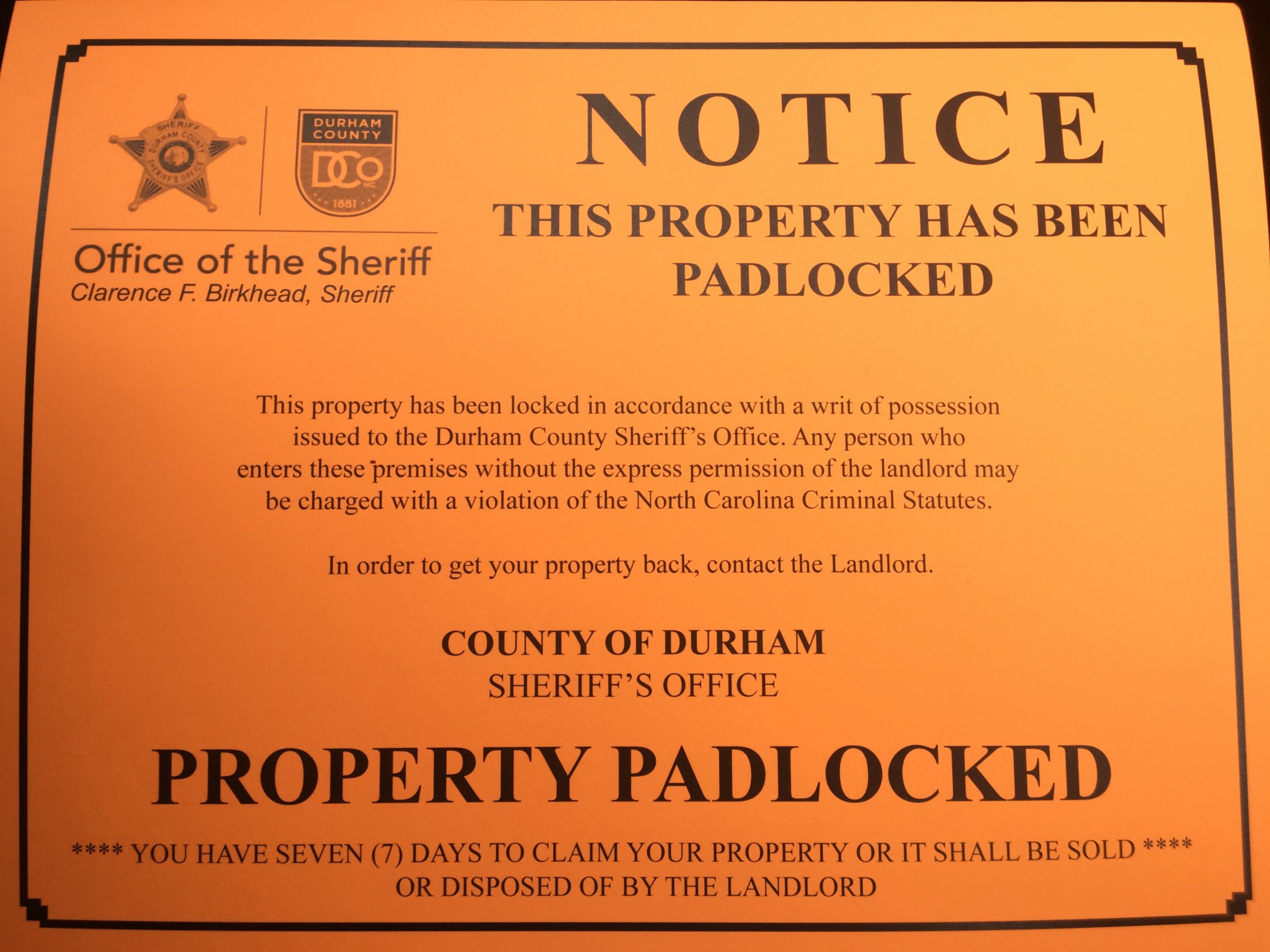 ‘You don’t know what’s behind the door’: Inside Durham’s evictions

Durham County Sheriff’s Deputy Michael Wood has the job that no one wants – especially not today, just a couple weeks before Thanksgiving, in the freezing weather.

Today is “padlock Friday,” the end to yet another week of evictions.

Wood has a stack of papers sandwiched between the sun visor and the roof of his white sheriff’s cruiser. Each one is a court order to complete an eviction, or a padlock, as they call it in the sheriff’s office.

It’s just above freezing, so Wood will have on his embroidered “sheriff” beanie, which falls just inches above his glasses. With a puffy black jacket on and a laptop that’s next to his steering wheel, there’s not much room left on the driver’s side of the car.

He’ll spend the day meeting with landlords and property managers, searching houses and apartments, and making sure that the locks have been changed on those properties so the evicted tenants cannot return.

Sometimes he finds families with children, abandoned pets, or, in one case, a tenant inflicting injuries on herself. But there’s nothing the sheriff’s office can do to change the eviction, Deputy Wood says.

“They were going to lose the property or wherever they live long before I got there,” he says, “and if it hadn’t been me doing it it’d have been somebody else.”

They all start with the same letter, calling the tenant to small claims court to answer for their failure to pay rent.

The tenant isn’t obligated to come to court, but if they don’t show, the eviction process will continue without them, Wood says.

Eviction court starts at 9 a.m. sharp nearly every weekday. Get there late for your hearing, and you might miss it in the sea of dozens scheduled for that morning.

On some mornings, the magistrates will hear well over 100 cases, especially at the start of the month, when landlords file more claims.

Once defendants find their names on the docket outside, they slip quietly into one of the hearing rooms. Unlike in District Court, defendants here are handled first-come, first-served.

There’s no bailiff or court reporter. The only record of each hearing will be the magistrate’s scribbles on the back of the case envelope.

There are two tables. One is for the landlord and an attorney; the other is for the tenant and their attorney. But tenants rarely have one.

Sometimes, the landlords won’t show up. They’ll contract the case out to a law firm that specializes in eviction cases; lawyers will come in about every month or so, outgunning dozens of tenants in just minutes each.

Is your agreed-upon rent $550 per month?

Did you fail to pay rent for the months of September and October?

Are you still in possession of the property?

Tenants will admit that yes, they did sign the lease. And yes, that is the amount of rent that they agreed to. Yes, they missed rent for a month or two, but they were in a bind. They just lost their job, or their spouse died. Or their car broke down. Or a relative was sick.

And many tenants tell eye-opening stories about poor conditions. Tammie Gibson said her rental home turned from a family atmosphere into a nightmare, a toxic environment that led her to develop depression. She described a stove that routinely caught fire, persistent issues with rats, and domestic disputes with other residents.

“I didn’t want to be there a minute longer,” she said to the magistrate.

Sometimes, tenants purposely won’t pay their rent to try to force their landlord to address a nagging problem such as a rodent infestation or perpetually clogged plumbing.

But North Carolina doesn’t allow this retaliatory action. If you live there, you have to pay for it.

The court also has no responsibility to evaluate why tenants can’t or won’t pay. Despite Durham’s problem with skyrocketing rents, with average rent rising 15% in the past three years, the court cannot grant tenants reprieve. From the court’s perspective, it’s simple: the tenant hasn’t paid rent, and the landlord needs the property back. The magistrate then has to rule against the tenant.

Unless the tenant appeals the judgment within 10 days, it becomes a permanent eviction record, influencing credit scores and job applications for years to come.

Once that judgment is processed by the court, it’s added to Deputy Wood’s docket of padlocks.

He crisscrosses Durham every day, from downtown luxury apartments to public housing to  new suburban townhomes. Every hour, on the hour, he has an appointment to meet with a landlord to enforce the court’s ruling.

“You’re there for a job. You’re not there to judge people,” he says.

When he arrives, he gives the landlords his standard spiel: the tenant has seven days to reach out to the landlord to retrieve their property. Whatever is left in the property, whether it’s an unplugged fridge with rotting food or hordes of roaches scurrying around the corners, is up to the landlord to deal with.

He avoids most of their questions, advising them to get legal advice from somewhere else.

He knocks and presses his ear against the door, listening for movement to assess what he’ll face inside.

He walks in and holds up a flashlight as he searches rooms, closets, and cabinets,, hoping to avoid a possible threat around the corner.

People hide, he says. They’ll hide in nooks and crannies around the house, hoping to stave off eviction for a few more days, clinging to the time they have left.

But there’s no wiggle room, he says. He can’t give a tenant a couple hours, regardless how dire the situation. He is required to complete the eviction.

“At some point they have to know if they haven’t been paying their rent or fulfilling their obligation to the landlord … they’re being evicted,” he says.

A rare and lucky few will successfully appeal their eviction in District Court and get to stay in  their home.

Many others will work it out with their landlords — last-ditch efforts to cover the overdue rent or hastily work out a payment plan.

“We’re standing there, the locks are in hand, they’re about to get changed and (the landlord and tenant will) make a deal or they’ll work it out and they’ll stop,” Wood says.

More often than not, though, he’ll find an empty property. Maybe the tenant left to avoid embarrassment, or maybe they fled the country, fleeing their eviction record as well.

But there’s nothing he can do about it now. He posts the orange sign and leaves.

In photo at top: Deputy Wood posts this sign before a landlord changes the lock. Once a padlock is complete, the tenant has seven days to arrange a time to pick up their belongings. Photo by Niharika Vattikonda | The 9th Street Journal