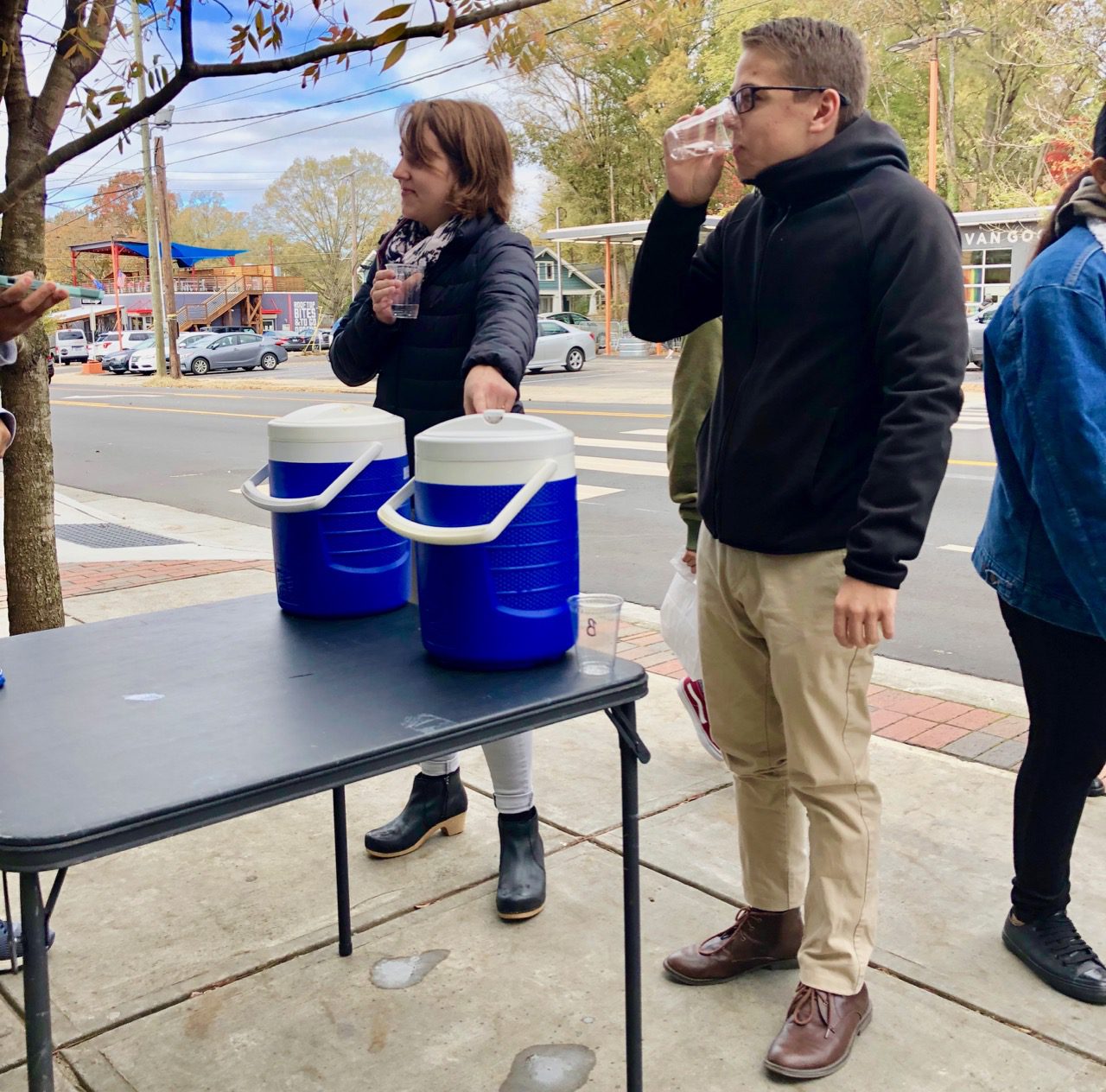 By Cameron Oglesby
and Kathleen Hobson

Ask random people to compare tap water from Durham and Chapel Hill and expect results as clear as mud.

9th Street Journal reporters learned that last week after setting up a blind taste test outside the Durham Co-op Market.

The North Carolina American Water Works Association and Water Environment Association does not agree. At its annual conference this month, judges there deemed tap water from the city of Durham more delicious than 10 other competing water systems — including Chapel Hill’s drinking water provider.

“We’re very lucky,” Westbrook said. “The areas around them are relatively undeveloped and they’re the headwaters so they don’t get as much runoff compared to downstream reservoirs like Falls Lake,” she said.

The overall quality and taste of the water in these reservoirs varies from year to year, a fact that may explain Durham’s 12-year drought winning the best-tasting title between 2006 and 2018, she said.

The actual treatment process at Durham’s Daniel M. Williams and Brown Treatment Centers is “fairly consistent” with other public water system techniques, Westbrook said. “We may add some things here or there like other cities, but generally, the process is the same.”

The fact the water department used chemicals to suppress algal growth in the lakes for the past two springs may have helped. “There are a large variety of algae that will grow in lakes, generally because the water is not moving as it would in a river or stream. Algae in the blue-green algae family tend to create taste and odor issues,” she said.

Durham’s water supply is not free of any trace contaminants. Westbrook said the city is working to maintain quality water in part by protecting its sources. “We’ve been trying to preserve the water quality by purchasing the surrounding buffer areas around the lakes,” she said.

The North Carolina American Water Works Association water-tasting competition isn’t scientific, but it’s surprisingly systematic. “The folks who have been managing this contest have a very specific ritual they go through,” Westbrook said.

During the weekend conference, all tap water submissions must be turned in by 5 pm on Sundays. Samples are refrigerated at a consistent temperature until Tuesday when the water is tasted after reaching room temperature.

The water is served in cups no bigger than Robitussin cups, said Westbrook, and judges use a swirl and swish technique familiar to wine tasters. Judges eat little crackers between each sample to cleanse their palates.

Some of the judges have tasted water for this competition, which Chapel Hill water’s provider has won in the past, for over 25 years.

Outside the co-op, things were looser. Anyone willing was invited to stop by a dark brown card table, take sips poured from identical blue jugs and join a makeshift case study.

Johnson agreed, Sample B is “kind of heavy” whereas Sample A is “a little lighter,” she said.

But after an hour of canvassing, the final results were four votes for Durham, four for Chapel Hill, suggesting the two might not be that far apart.

As she left Joe Van Gogh across the street from the co-op, Heidi Kippenhan had only nice things to say about Durham water, despite preferring what Chapel Hill serves up. “I drink water straight from the tap all the time and I have no complaints,” she said.

At top: Alison Sokol points to an unmarked jug holding Durham water during an impromptu taste test while her companion, Chase Johnson, makes up his mind.  Photo by Kathleen Hobson