Home » The spaces we occupy: Deberry urges Duke students to reflect on race and privilege 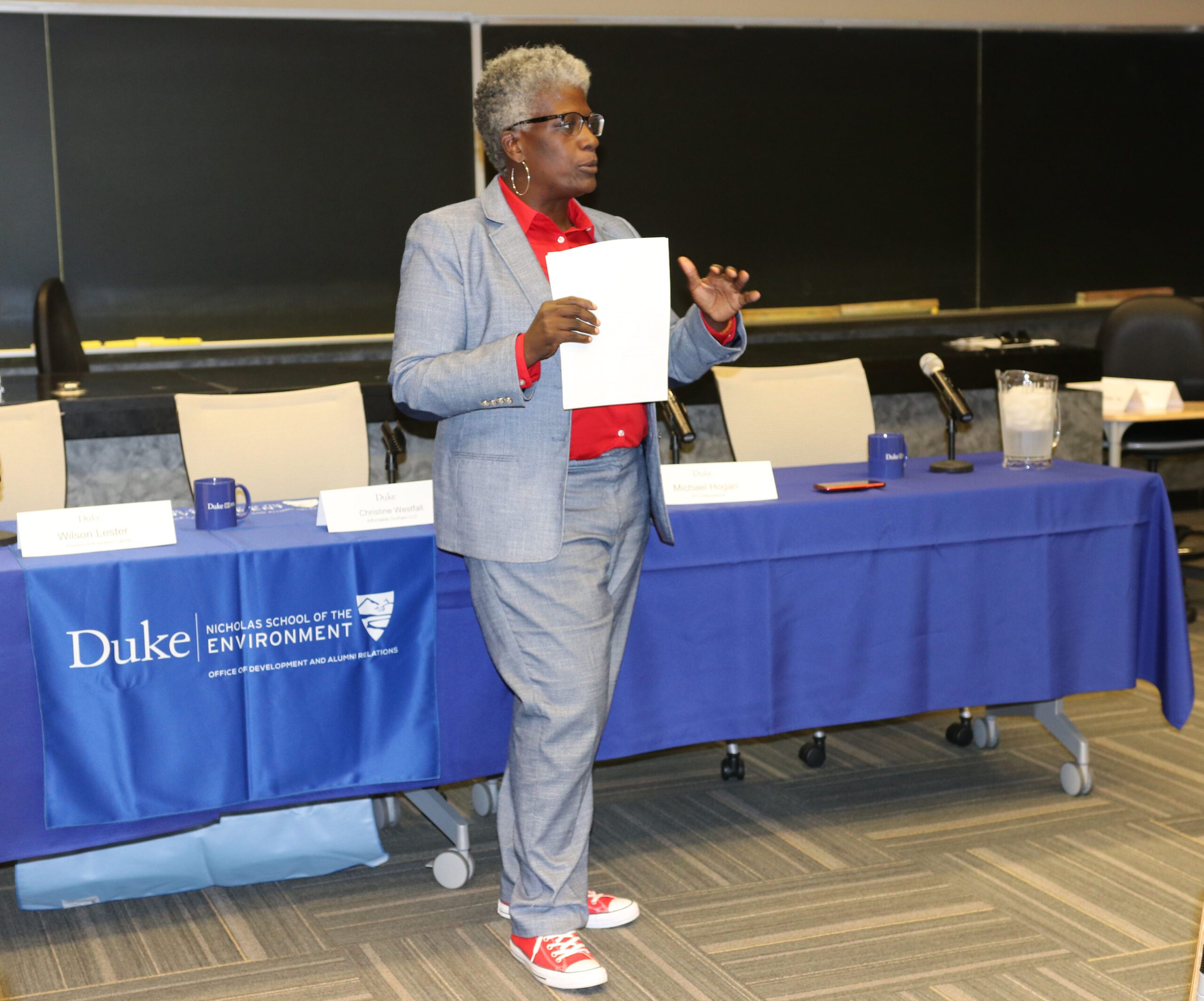 The spaces we occupy: Deberry urges Duke students to reflect on race and privilege

At a panel on public-private community partnerships, District Attorney Satana Deberry stood before a lecture hall of Duke students and introduced them to Durham — the real Durham.

“I’m going to take you on a little journey where we will talk about the challenge of our environment…where we live, and who gets to live here with us,” Deberry said.

The event was organized by Duke students from the Sanford School of Public Policy and the Nicholas School of the Environment. Its purpose was to bring together members of the community — public servants, activists, and academics — to discuss cross-sector methods for building a more equitable and sustainable Durham.

But rather than discussing the mechanics of public-private partnerships in her speech, Deberry decided to lay a foundation for the conversation by talking about race and privilege. She made it personal by encouraging Duke students — as Durham residents — to think deeply about the physical spaces they occupy in the community.

Deberry first described the Durham most Duke students know: An up-and-coming city filled with “renovated bungalows, walkable streets, and gleaming new apartments with those saltwater pools.” But she emphasized that those spaces are only for people who can afford an average rent of $1200 a month.

“You live in a space where a bank is willing to give you 700-times the loan that it once provided people who lived in that community just 10 years ago,” she said.

She explained that today’s downtown Durham has transformed drastically, not only in cost of living, but also demographically. When she went to Duke Law School in 1991, people viewed the city as rough and dangerous. In those days, she said, “if you came here to go to college at Duke, you were advised to never leave the confines of the university.”

But in the past decade, as rent prices skyrocketed and squeezed out minority residents, Duke students have been more willing to venture off campus. The Bull City has become a destination; people fly in from all over the world to watch films at Full Frame and hear music at DPAC.

“Now, you live in a physical space that sees you and the space you occupy as cool.” Deberry said. “It turns out that Durham was only a problem when black and brown bodies occupied those spaces.”

She paused for a moment to let that sink in.

Then, Deberry reminded her audience that even though she stood before them now as the district attorney, Durham’s image only changed when people who looked like her were driven out of downtown.

“I am one of those people. I’m black. I’m a woman,” she said. “Had I been sitting in a different space today, you may have understood me to be someone else. I’m not here to serve your food.”

As a black woman from the South, Deberry understands how seeing the word “negro” written on her birth certificate can impact the psyche. She understands what it was like to watch her childhood friends go through the criminal justice system and what it is like to be the great-grandchild of people born into slavery.

“What does it mean for someone who looks like me, with my history, to be D.A. in this community?” she asked. “What does it mean in a place where so many people who look like me are subjected to the vagaries of the criminal justice system?”

By sharing Durham’s history, Deberry helped her audience recognize the racial biases that underpin American institutions, especially criminal justice. Deberry saw that understanding as an essential precursor to any conversation about equity and sustainability.

“When I speak at Duke, I hope that some student hears it and uses it going forward,” Deberry said while reflecting on her speech. “I hope they hear me and recognize their privilege, especially in this community.”