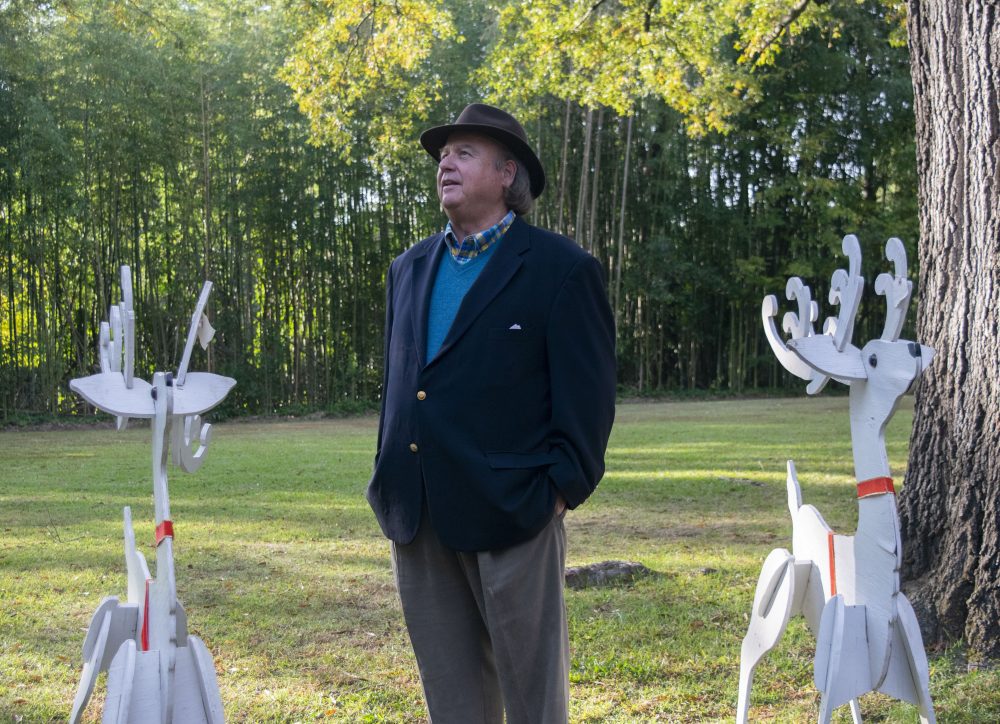 Inside the gates of the Durham estate where Kathleen Peterson lived with her husband Michael are a pair of Christmas decorations that could have led to her death: two white wooden reindeer with red ribbon around their necks.

The reindeer are part of attorney Larry Pollard’s theory that an owl attacked Kathleen.

The reindeer may have been stored in a nearby barn where the owls grew up, Pollard said, so the owls could have become imprinted and associated the reindeer with their mothers. An owl may have seen Kathleen as a threat to its mother—and pounced on her with its talons to protect its mother. Kathleen then could have run inside to the safety of her home before she fell down a staircase and died.

Pollard and his wife own the reindeer now. They bought them when Peterson had to auction off his belongings to pay legal fees.

In a trial that put Durham on the Court TV map just a few years before the Duke lacrosse case, Peterson was convicted of murdering his wife after the prosecution argued he beat her. Interest in the case and the owl theory has picked up after “The Staircase,” a 13-episode documentary on the case, was released on Netflix last summer.

Peterson served time in prison from 2003 until 2011, when a judge ruled that jurors were misled about blood evidence by one of the prosecution’s key witnesses. Peterson was granted a new trial but decided to plead guilty to voluntary manslaughter in 2017 to avoid more prison time. The 75-year-old has continued to maintain his innocence.

Pollard, who still lives next door, says he has served as an attorney for Peterson on the case, submitting motions, although none have succeeded.

The owl theory has become Pollard’s obsession. Pollard said he has helped out Peterson without taking a penny.

In his office with red and grey carpet and ceiling-high mirrors in the lobby, Pollard displays his degrees, owl books, stuffed owls, mannequin heads, life-sized marlins—and one cartoon that suggests he has a sense of humor about some of the criticism about the theory.

It shows Pollard standing at a podium with a flying pig next to him.

“If we learn it wasn’t an owl that killed Mrs. Peterson,” a portly caricature of him says, “we have an alternate explanation!”

Pollard, 70, has lived on the same street in Durham for his whole life. He earned his undergraduate degree from the University of North Carolina at Chapel Hill and his law degree from Wake Forest and has practiced law for more than 40 years, he says.

He attended the Northwestern School of Prosecuting Attorneys and became an Associate Attorney General in the Department of Justice assigned to the special prosecution division of the North Carolina Attorney General’s office, where he took part in trials and appellate cases.

He was Peterson’s neighbor for nearly 10 years, and while they were not close friends by any stretch, Pollard said Peterson was congenial and active. The last time he saw Kathleen alive, in late November 2001, she was walking off from Pollard’s house hand-in-hand with Peterson. Kathleen died Dec. 9, 2001.

Pollard first floated the owl theory when he saw Kathleen’s wounds on television during trial coverage—he thought they looked like talon marks. Owls were fresh on his brain: just over a month before, an ornithologist had brought birds of prey—including owls—to a family reunion to entertain the kids. While the ornithologist presented, other adults stood around socializing.

“I was sitting there watching and drinking my lemonade,” Pollard said.

He called up the ornithologist, who noted that owls have been known to attack humans. From there, he has talked to countless experts on birds and been an avid consumer of owl information, although his theory has not helped Peterson in appeals.

A look at the Peterson property—”Wonderland”

On a brisk fall day, Pollard, donned a dapper hat, a suit jacket, a vest and tie, and took me to the gates of “Wonderland”—the old Peterson home—to detail his theory.

The house, which has changed owners twice, looks a lot different than it did when the documentary was filmed in just after the turn of the millennium. The pool, featured in many shots in the Netflix episodes, is empty.

When the Petersons lived there, there was no fence. After Kathleen was killed, the house became a marvel. People came from miles away to see where she had died, even cruising up the driveway to try and get a glimpse inside.

The residents after the Petersons, the man who co-owned Mad Hatter’s restaurant before selling it, put up gates that say “Wonderland” in gothic letters, plus a separate privacy fence, Brenda said. Now, another sign has been added that reads “NO TRESPASSING” in red lettering.

Elsewhere, fences may be normal, Brenda said, but not in this cozy neighborhood in Durham.

In their sprawling Southern neighborhood lined with oak and pine trees, it felt like Trump putting up a wall, she said.

As we walked up the winding driveway towards the white mansion, Pollard pointed to an old wooden building between his property and what used to be the Peterson’s. It’s a barn where the owls probably roosted, he explained. His dogs used to bark at the owls constantly.

“I used to think someone was hiding in the bushes,” he said, but then concluded it was the owls.

They made their homes in the barn, the same one that the Petersons may have used to store wooden reindeer that they put near their driveway for Christmas. He still sees them fly around the property.

His theory is that owls may have been confused by the wooden deer, which were stored in the barn. The owls, which are known to strike humans, may have associated those big eyes with their mother’s.

So Pollard theorized that when Kathleen came out front and adjusted the reindeer, the owls could have taken it as a threat to their mother. Blasted with floodlights from the front of the home, the glasses on her head may have also given off a flicker of white—a color owls are attracted to, he says.

But Matt Larson, an owl researcher at the Owl Research Institute, told the 9th Street Journal that an owl striking Kathleen due to imprinting or the glint of the glasses would be unlikely.

Imprinting mostly influences sexual preference, Larson said. So if a bird of one species was fostered by a mother of a different species, it may prefer a mate from its mother’s species, or the one it imprinted to over its own species. Larson also said that he has never observed or heard of owls defending their parents from predators.

“Adult owls will often aggressively defend their nests from potential predators, including humans. But I’ve only ever observed this during the breeding season and around the immediate nesting area.” Larson said. “To my knowledge, chicks don’t defend their predators or siblings.”

As to attacking Kathleen after seeing the glint of her glasses, Larson said that owls could strike if the glint was prey, but they have excellent vision in low light.

“I’ve never seen an owl go after glinting light (or anything like it), but I suppose it’s possible,” Larson said.

The late-night timing also gives a reason why an owl might strike, Pollard said. The pool in the backyard is an owl “grocery store.” Small critters come out in the safety of night for water and make perfect snacks.

He believes that after Kathleen was attacked, she ran inside and tried to go upstairs. But after having taken Valium and had some wine, she fainted and collapsed, smearing blood on the walls of the staircase and leaving a layer of blood that later was found dry, he argues. She later became conscious and tried to stand up, but fell over again, hit her head and got knocked out again, Pollard says, pointing to a second wet later of blood and wound evidence. There, she bled to death.

He has studied owl talons and concluded that the wounds match up with the wounds the talons would inflict.

When owls strike, they grip at 280 pounds of pressure, while humans grip at just 28 pounds, Pollard said. Their talons strike in a unique way—the outside digits go sideways, peeling “the meat off the bone.”

“It’s like a spoon going through mashed potatoes or a box of ice cream,” Pollard said.

The wound is much different than what would have been inflicted by a fireplace tool, which was the prosecution’s theory.

A microscopic feather was also discovered in Kathleen’s hair—something Pollard said only owls have. He called it his smoking feather, although he has declined to conduct a DNA test on it.

Carla Dove, a forensic ornithologist and Program Manager of the Feather Identification Lab at the Smithsonian Institution, said other birds have feathers on their talons, including golden eagles, but wasn’t sure if other birds have microscopic feathers.

Dove looked at microscopic photographs of the feather from Kathleen that police investigators discovered and signed an affidavit saying she could not identify which bird the feather is from.

One of the photographs wasn’t in focus well and key identifying features were not visible.

Pollard: Follow the blood to prove the owl theory

The prosecution argued Peterson beat Kathleen in the staircase and took the bloodied murder weapon out to hide, leaving blood droplets outside. No murder weapon has been found. The prosecution alleged it was a missing fireplace tool called a blow poke, but it was later found and had no blood on it.

In his office, which he called his “war room,” he demonstrated with a mannequin head how blood from a wound could soak hair and splatter the walls when Kathleen fell.

It’s a pattern he has observed as a hunter.

“Any self-respecting deer hunter in North Carolina will tell you a blood trail starts with one drop. It takes time for blood to come out of the wound, reach an edge and drip off,” Pollard said.

For Pollard, this was the culmination of an unusual combination of things, including his knowledge of brain injuries that came from his brother’s tragic death in a plane crash and his love for hunting.

“As corny as this sounds,” he said, “I’ve always thought there was something spiritual about this case.”

Some people think the owl theory is preposterous.

Crabtree said when he walked into the Peterson house and saw the vast amount of blood staircase, he knew it was no accident.

“Larry Pollard is a great guy and a man of integrity,” Crabtree told the 9th Street Journal, but  “that owl theory is one of the most far-fetched things I’ve heard.”

Pollard brought the theory to David Rudolf, Peterson’s defense attorney, just before closing arguments. But evidence had already been closed for the trial—and Rudolf had argued for months that Kathleen had died in a fall.

“I had tunnel vision,” Rudolf said at a talk Oct. 3 at Durham’s Carolina Theatre. “I had a theory that it was a fall, and anything that was inconsistent with that theory or might have been, I came up with my own explanations for.” Rudolf said the theory is now plausible.

After being skeptical at first, Peterson has also become a believer in the owl theory, Pollard said.

Pollard said he will continue to push to clear Peterson’s name—he says all he has to do is file evidence that a judge rules “clear and convincing.”

He owes it to his friend and neighbor. And there’s still a killer at large.

“On the day I die, I wouldn’t want my family to think, ‘well there goes the killer.’”