Home » A Durham Moment: ‘It’s the most precious gift I think I’ve ever received.’ 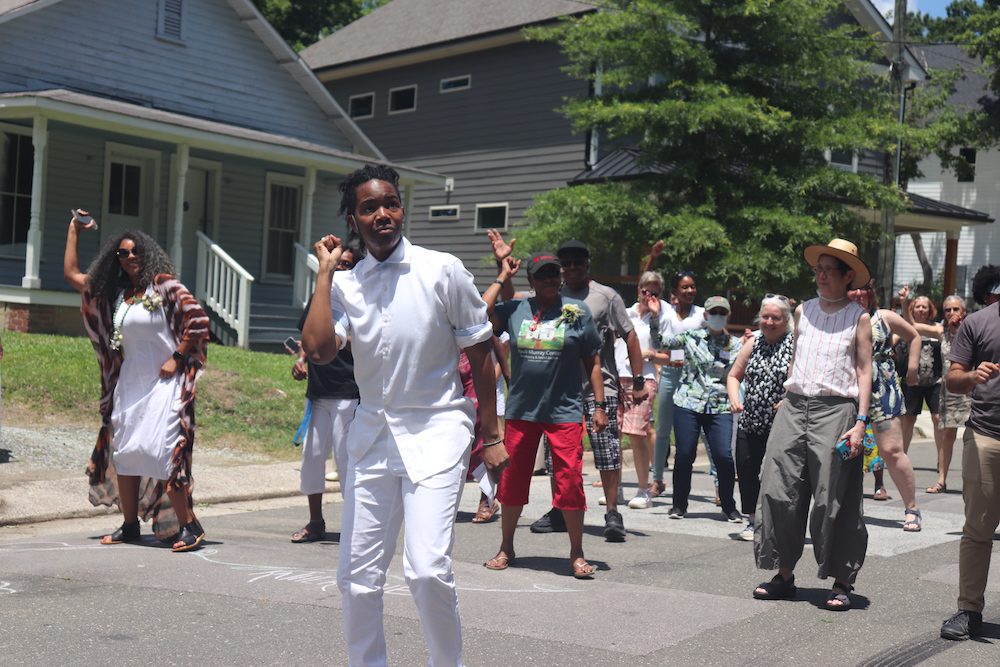 A Durham Moment: ‘It’s the most precious gift I think I’ve ever received.’

Anna Pauline “Pauli” Murray wore many robes. Murray was an activist—a poet-turned-lawyer-turned-priest. She was a Durhamite—a child who grew up wandering the West End. She was a champion for gender equality—an inspiration for Ruth Bader Ginsburg. Nonetheless, Pauli Murray was a misfit—a light-skinned Black girl of the “Jane Crow” (a term she coined) South. As she matured, Murray fell in love with other women and questioned whether she was a woman at all.

Murray’s life, in all its multiplicity, was the focus on a recent Saturday at the Pauli Murray Center for History and Social Justice, which celebrated its tenth anniversary on June 18. 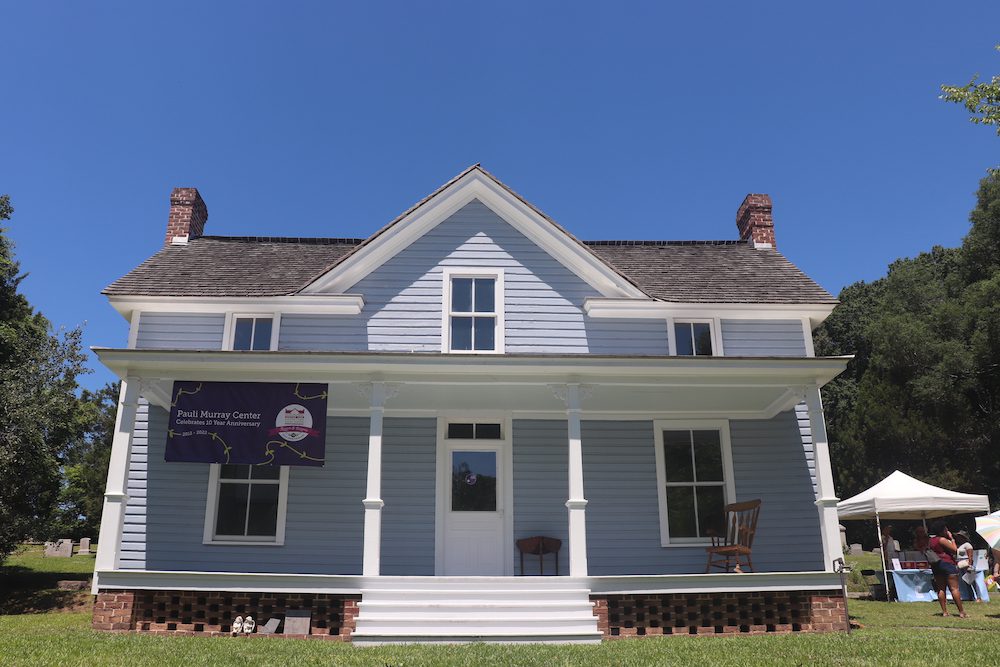 Murray’s restored childhood home at 906 Carroll St. where Murray lived with the Fitzgeralds, her maternal grandparents and aunts, anchors the festivities. The white clapboard house, originally built in 1898, is now baby blue. The bordering streets and sidewalks have been embellished with pastel chalk illustrations.

At the center of the property is a canopy tent, which sheathes a stage ornamented with potted plants and rows of people seated in white folding chairs. Center board members rise from the chairs to share anonymous prayers for the future of the Pauli Murray Center.

“Just imagine yourself on the porch of the newly renovated Pauli Murray Welcome and Education Center,” a member reads. “My prayer for the center is to be a place where people learn to embrace their freedom, imagine possibilities for structuring their lives and relationships and find divine power for healing.”

After the reading, visitors are encouraged to take a break and explore the property. At a table in the right corner of the yard, archaeologist Anna Agbe-Davies presents the fruits of excavation efforts that she directed at the Pauli Murray family home.

Agbe-Davies ​​represents UNC-Chapel Hill’s Research Laboratories of Archaeology. Before the Pauli Murray Center tackled restoring the home’s exterior in 2017, the labs excavated a fragmented pen, a gold zipper, a shattered glass door knob and more at the site. They also uncovered remnants of an inadequate drainage system on the lot—issues that are mentioned again and again in the Fitzgeralds’ complaints to the City of Durham in the early twentieth century. These excavation efforts, Agbe-Davies says, give us insight into what Murray’s life here may have looked like a decade ago.

Around the bend at the book shop, a plethora of works by Pauli Murray are on display: Proud Shoes, a nonfiction homage to the lives of the Fitzgeralds, Dark Testament, a collection of poems that speak to Murray’s dream of racial justice and equality and Song in a Weary Throat, an autobiography that documents Murray’s crusades as a civil rights activist and feminist.

Pauli Murray’s niece, Rosita Stevens-Holsey, chats near the stage with visitors and other board members. Some shoppers who purchase her newly-published children’s book, Pauli Murray: The Life of a Pioneering Feminist and Civil Rights Activist, seek her out for a signing.

Perkins & Will, the architectural design company leading the center’s renovation efforts, is last in the sequence of tables, next to a weathered home that will soon be converted into the Pauli Murray Welcome and Education Center.

Scott Hefner of Perkins & Will discusses construction plans for a prospective welcome and education center on the property, which they hope will be open to the public by 2024. 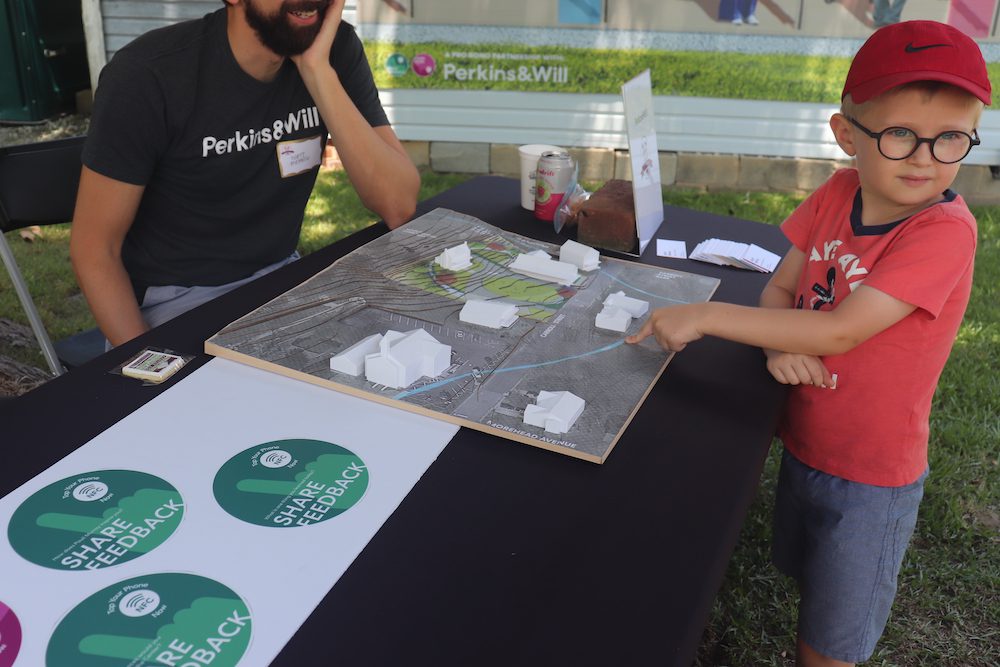 Visitors play with the 3D-printed neighborhood model and listen as Hefner describes the timeline. The listeners include a six-year-old boy named Andrew and his father William Tate from the nearby West End neighborhood.

“So the interior renovation of the historic house will be in the next month or two, ” Hefder begins. “And hopefully—”

“I just want to learn a little bit more about this stuff!” Andrew interjects.

“That’s awesome,” Hefner continues. “So behind the Education and Welcome Center will be an amphitheater so that you can sit on these terrace steps and look down on any future performances.”

“And this part is very interesting!” says Andrew, pointing at the model.

After a break, Beth Ward, a longtime family friend of Pauli Murray, strolls to the center of the stage.

“So I was maybe 11 or 12 when I met Pauli,” Ward says. “She would stay with my family every weekend. And her dog, Roy, my best pal, and we would spend a lot of time together. As I’ve grown up and come to understand just how incredibly lucky and blessed I was.”

Ward recalls Murray’s final months after being diagnosed with pancreatic cancer in the 1980s. While Murray made haste to complete her final published work, Ward edited Murray’s manuscripts, did her taxes and handled correspondence.

“And I would help in whatever ways I could,” Ward says. “As you can imagine, it was a very heartfelt time and incredibly wonderful. My mother and I were with Pauli the day before she died.” Ward pauses in an attempt to stifle tears.

As Ward speaks, volunteers stand at the left corner of the tent, near a table cloaked in fabric. At Ward’s command, they gently tug the cloth, revealing a vintage manual typewriter that once belonged to Murray.

“And Pauli gave me her typewriter, which is here, and it’s the most precious gift I think I’ve ever received.” 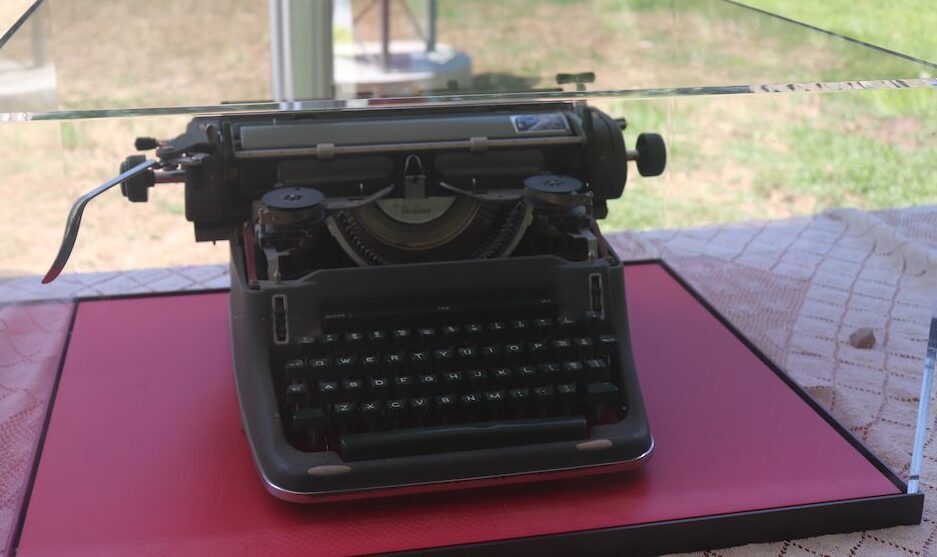 With that, the donation is official: Pauli Murray’s typewriter, formerly on loan at Murray’s alma mater, Yale University, will now reside at the Pauli Murray Center.

“I’ve been beyond thrilled with the work done at the Pauli Murray Center,” Ward says. “To the credit of the City of Durham, Pauli’s neighbors and the board, Pauli has started to come into her own; history is at long last starting to catch up with her.”

The audience hums affirmations and applauds.

“Pauli would say one person plus one typewriter equals a movement,” Ward says. “So this is the place for a movement. It’s a place for activism, for feeling and for reflection—all of the different parts of Pauli coming together.”

Sangodare Wallace of Mobile Homecoming Trust then takes the stage, begins singing and invites the audience to dance. She demonstrates a two-step routine, and laughter ripples through the crowd as they try to emulate Wallace’s movements. Wallace ushers the dancers down the path by the future welcome center, and participants sing out Murray’s name as they stride down Carroll Street. 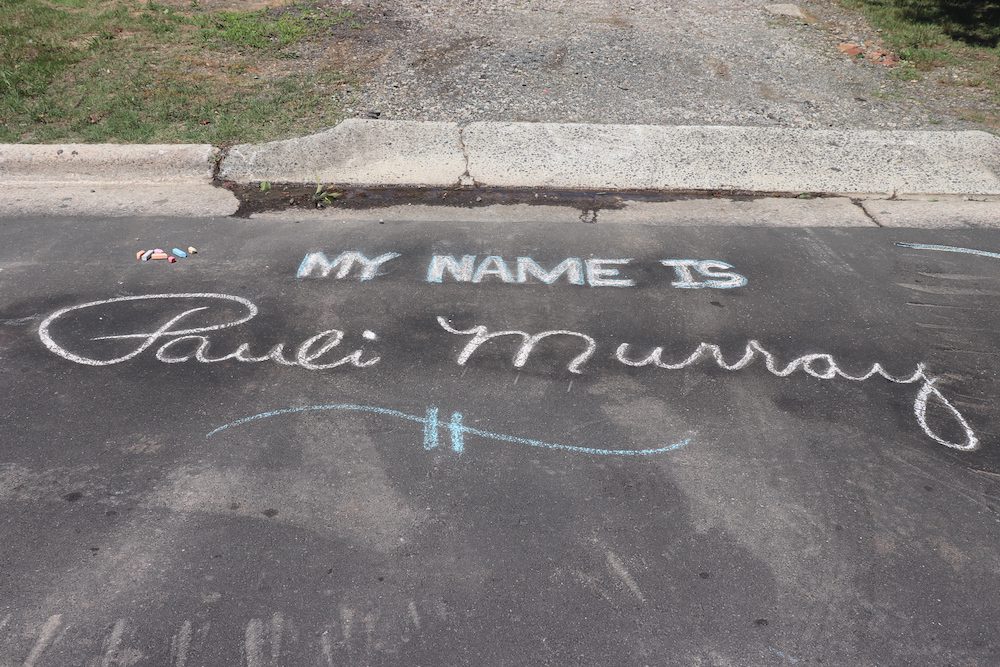