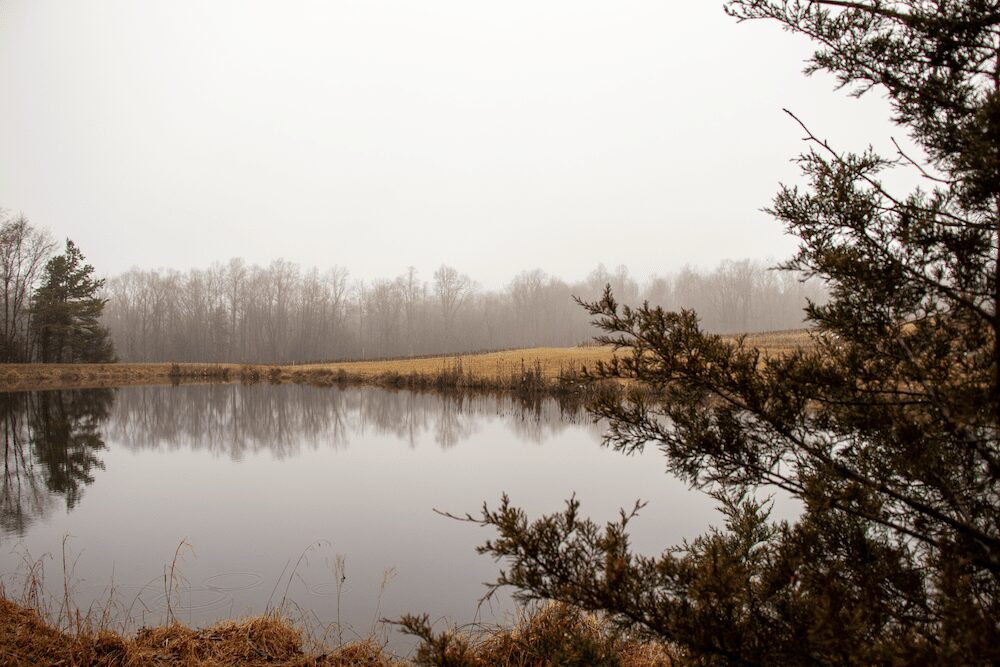 Maybe you’re an avid environmentalist with an eye to the conservation of native habitats.

Maybe you’re chemical conscious and can’t imagine contributing to the 827,060 gallons of carcinogenic fluids buried in the ground each year.

Maybe you want your children and grandchildren to be able to enjoy your final resting place as more than a cemetery — as a place for recreation, refuge in, and reverence for nature.

Bluestem practices green burial — which Heidi says is “just a new name for how we used to bury long ago, how many cultures still bury, where there’s no embalming, no vaults, and biodegradable materials instead of metal caskets and steel.”

Current burial norms took shape during the Civil War, when wishes for the bodies of deceased soldiers to be returned home in preserved condition led to the development of embalming technology. But because only licensed embalmers could offer this service, families who wanted embalming could no longer bury their own: they needed the help of morticians and funeral homes. The decades progressed, and families increasingly laid their loved ones to rest in steel caskets and concrete vaults beneath monoculture lawns kept green with pesticides.

The status quo — of clearcutting and manicuring the land, making space to barricade our dead selves from the earth — has reigned for seven score and seventeen years (or so). Now folks like you are searching for something new.

To reach Bluestem, you navigate roads that weave and wind through rolling hills and quaint farmhouses until you arrive at Hurdle Mills Road, where Bluestem sprawls across 87 acres of Cedar Grove in Orange County.

You bounce along the dirt road and roll to a stop in what Heidi calls the “anteroom” of the cemetery. It’s the first of Bluestem’s “outdoor rooms.” 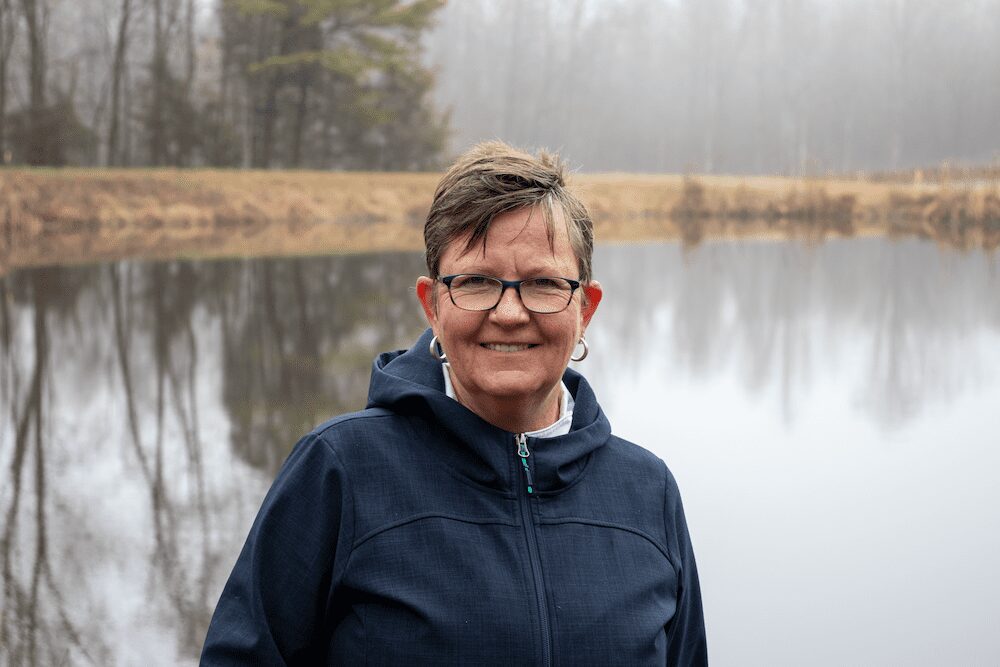 You’re greeted by Heidi, who wears her hair cropped and a stud in her nose, and Jeff, who sports a red cap embroidered with the Bluestem logo. Both have kind eyes etched by years of laughter.

Together, you stroll towards the cozy cabin that serves as Bluestem’s office. The cabin is a ripe 140 years old, and Bluestem’s choice not to renovate or expand it is a conscious one, Heidi says. “We’re trying to promote that idea that nature is enough, so we don’t need to bring a lot of human impact to develop.”

Bluestem is a conservation project at heart, so choosing its home was something Heidi and Jeff did with “great intention and respect.”

“Restoring these agricultural fields back to grassland is a key attribute of our project,” Jeff  explains. Monoculture, the cultivation of one crop in a certain area, is efficient for food production but can lead to damaged soil and loss of biodiversity over time. With the help of volunteers, the project will work to heal the land by planting grasses native to the Piedmont region — including Bluestem grass, for which the nonprofit is named.

“The grassland habitat will be a huge refuge for pollinators, for diversity of wildlife,” Jeff says. “There are migratory birds that fly through, looking for seed sources along the way. Bluestem will provide that.” 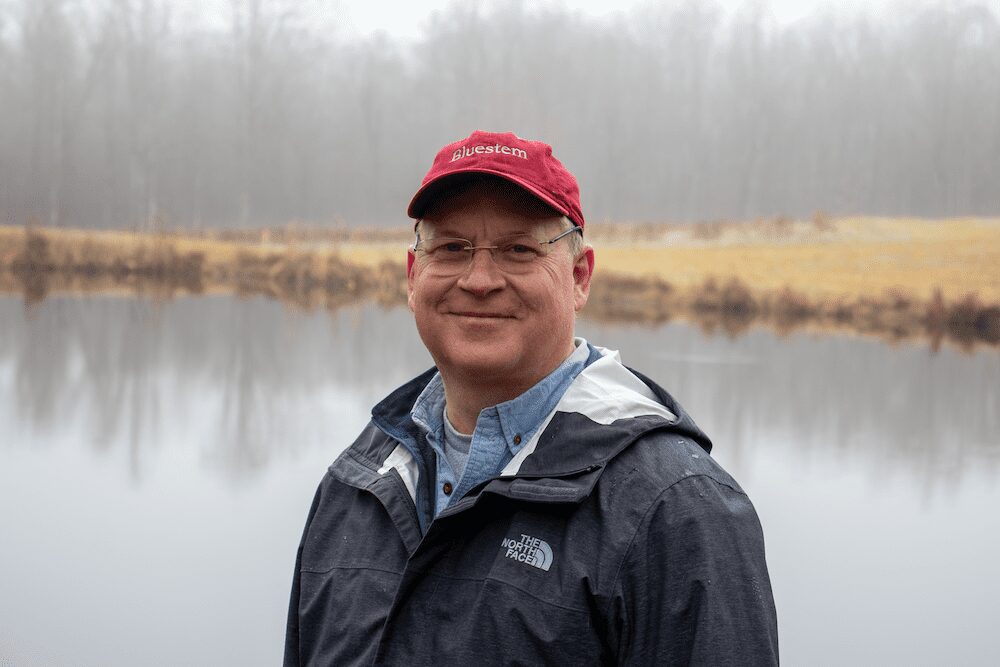 The grasses’ root systems will sequester atmospheric carbon dioxide and reach some five feet into the ground. “So the grass actually serves as a large carbon sink,” Jeff says.

“This is part of our ethos of thinking globally, acting locally. We’re not moving a world needle on climate change. But maybe we’re getting people to be more cognizant of how we’re impacting the world.”

You want a tour of the property, so you follow Jeff and Heidi out of the cabin and through the “anteroom” to the barn. It’s as old as the cabin and equally picturesque. Delightfully anachronistic. The barn serves as the Information Center, as well as a place people can gather with their loved ones or host their faith communities during the burial process.

“It’s an invitation to any faith communities to come and hold services,” says Heidi. “But also, for people who don’t have a particular faith, this can be a reverential space to come into nature and have your own spiritual experience. To feel one with nature.” 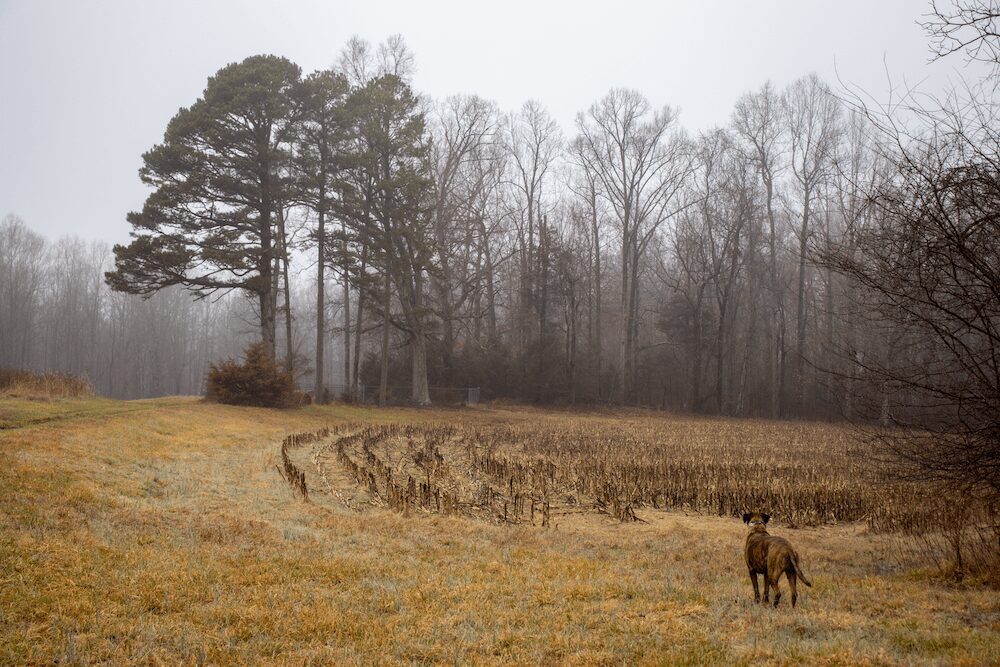 Heidi and Jeff lead you on the pedestrian trail, where you trod on damp amber oak leaves and occasionally brush against a spindly branch. The trail system spans four miles, looping around a glassy silver pond and unfurling into distant woods. But now you’ve reached the middle of a clearing.

You stop, throw your head back, and look up.

You see what Heidi was talking about: this really does feel like an outdoor room.

And something else, too. Since you left the barn, you’ve traveled about 70 feet downhill. The hill shields you from the last vestiges of sound from the road. All you can hear is birdsong and quiet.

“This land sang to us,” says Heidi.

Beyond the pond is a sweeping field, where the horizon reveals itself. “It’s like the big sky of the West,” says Jeff.

“When you come out here, you can let go of all the city life that you carry,” Heidi says. “You arrive here, and the sky opening up… it’s a release.”

“This place will be able to carry the souls of the people who will be buried here. And we think of that as an incredibly healing opportunity.”

You emerge from the forest and amble down a dirt road. Then Heidi stops, sweeping an arm in the direction of the large field that fans out in front of you. “This is our big, wide-open field for grassland burial.”

At Bluestem, one can choose between grassland burial in the fields, and woodland burial amongst the trees.

“We’re trying to limit those things that have a sizable environmental impact,” Jeff says. So for grassland burials, “we won’t be mowing pathways to each grave.”

These aren’t comfortable ideas for everyone. When trying to find a home for Bluestem, Jeff says many potential neighbors “shook their head or turned white or talked about zombies.” Others worry about whether animals will dig up graves. (“Our colleagues have not had a problem with that whatsoever,” Heidi says.) You can’t put up a bench, or that traditional veteran marker with the flag: headstones are welcome, but they’ll have to be flat to the ground. If you choose a woodland burial, a tree might fall on your spot and it might have to stay there.

“It will challenge a lot of people,” Jeff acknowledges. “But our philosophy is that it’s less about the individual space, because the whole of Bluestem is the memorial to each individual here. You become integrated into it.”

Jeff explains that the grasses help to hold soil in place. “So when someone is buried, nothing is removed from the site. All of the soil that comes out will go back in the same hole, so it will be mounded. And over time, as decomposition occurs, it will subside and become flat again.”

A tangible reflection of incorporation into the earth.

You stroll on until you’ve passed the large field, and you stand, looking out at another field for grassland burial. It’s bordered by a distant forest, where woodland burials will take place. 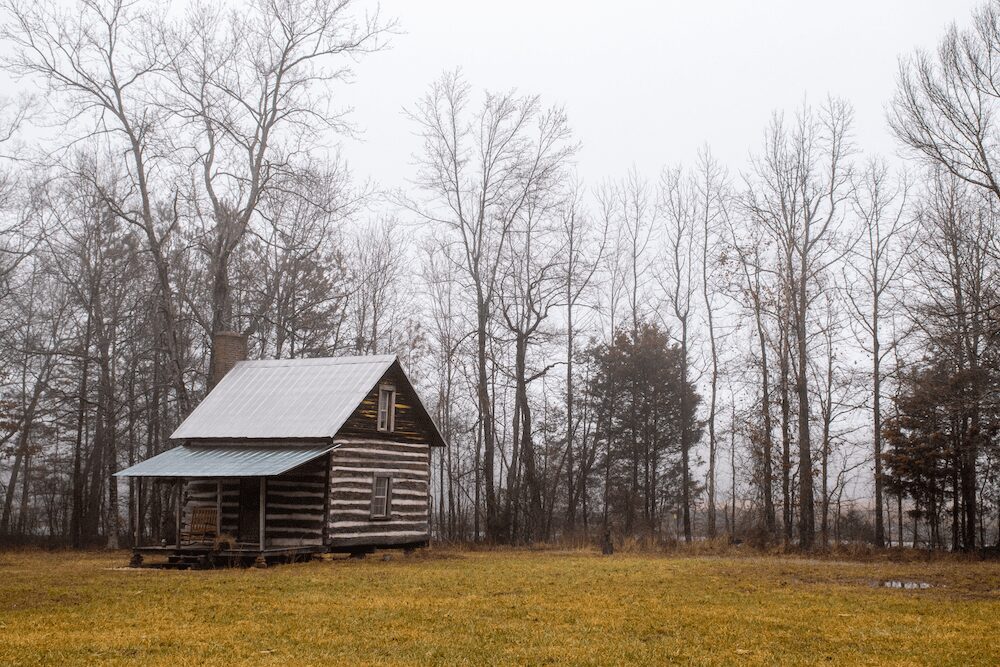 Before Bluestem, Heidi and Jeff led careers in conservation: Jeff worked as conservation director at Triangle Land Conservancy and Heidi as the Southeast program manager for Land Trust Alliance, and the two later joined forces to launch a local conservation consulting firm, Landmatters. Then Jeff met Billy Campbell, co-founder of the nation’s first modern conservation cemetery. Campbell spoke of cemeteries where each burial supports the conservation of the land.

“With conservation burial, you’re not burying your wealth,” Heidi says. “Instead, it’s going into preserving a living, healing space.” (And the pricetag doesn’t hurt: what you’d pay to be buried at Bluestem — sans embalming, fancy caskets, and vaults — is about half the cost of traditional burial.)

Campbell inspired them, but starting their own cemetery still felt out of reach. In 2006, Jeff says conservation burial still seemed “a little bit ahead of its time for the Triangle.”

Then in 2015, Heidi’s mother was diagnosed with a glioblastoma. She didn’t have long. Heidi dropped everything to take care of her.

Shortly after, Jeff’s father was diagnosed with a terminal illness, and he became the caregiver for his father.

“After we helped our parents to their end, we realized that the way our parents chose to be for their final disposition… it wasn’t what we wanted,” Heidi says.

Jeff agrees. “We thought, there’s another way for us to think about this.”

Heading back, you ascend what you now realize is a slight hill. Heidi and Jeff point out additional fields that will someday be used for burial. Until then, they’ll be filled with wildflowers.

Choosing a conservation burial means participating in the ecosystem financially, in body, and in spirit. Heidi and Jeff have already spotted 32 species of birds on the property. It’s a peaceful thought, to think of yourself as contributing to this community of grasses and wildflowers and birds.

Heidi and Jeff say Bluestem will serve as a living memorial to the souls that dwell there.

“It’s something that’s not just after the fact,” Jeff says. “It’s not a feeling of, ‘Oh, I’m choosing a place where my remains will be.’ It’s choosing a place that I want to be when I’m alive. And for my family, when they come to visit after I die.”

Heidi agrees. “We don’t have to be terrified of death. We can make space for the fact that we’re all impermanent. And so, when that time comes, why not become part of this gorgeous place?”

Bluestem is not currently selling burial plots, but volunteer opportunities and group tours are underway.