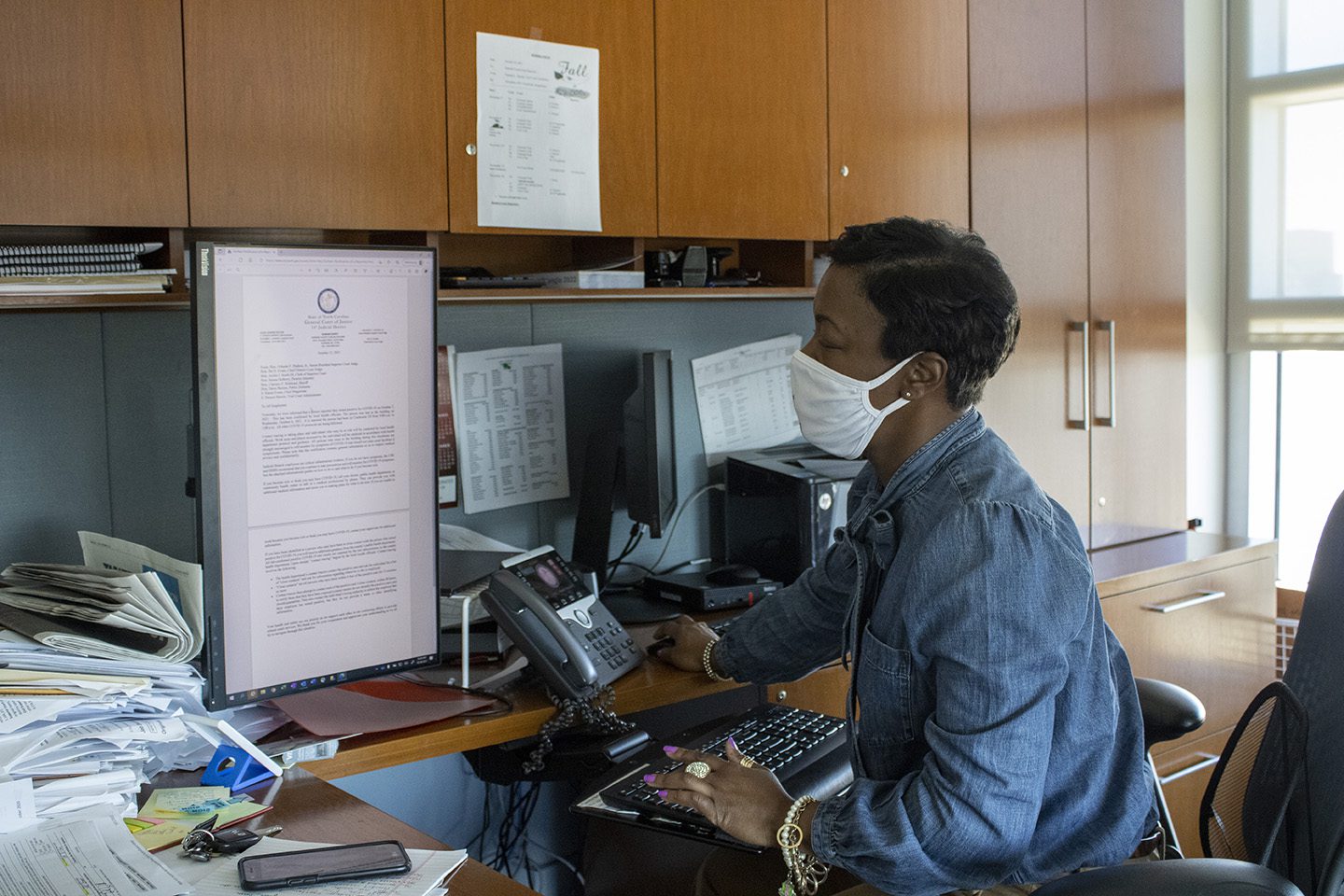 Pushed into a corner beside her monitor, an enormous stack of jumbled documents dominates the space. Barrier thumbs through the pile as she hunts for a jury selection calendar, flipping past paperwork from seemingly every department in the Durham County Courthouse.

Similar “pockets of danger,” as Barrier refers to them, litter the office. They include a thick stack of papers labeled “shred and destroy,” a mountain of boxes and scrambled files, and a whiteboard calendar still reading “May 2021.”

Barrier wears many hats in the courthouse, all of them involving keeping operations as smooth and organized as possible. But she doesn’t see bureaucracy the way most people do. Some might associate court management with red tape and closed doors, but Barrier said she’s centered her career around creativity, openness and a willingness to say “yes.”

And sometimes that means learning to work with chaos.

“It’s a Broadway show,” Barrier said, referring to the courthouse. “It’s the lights, it’s the cameras, it’s the props—it’s all that.”

Barrier’s office sits at the top of the courthouse, on the ninth floor — the same floor as the judges’ chambers and the District Attorney’s office. Her window offers astonishing views of downtown Durham surrounded by a sea of trees.

Barrier loves discussing her work. Dressed in slacks and a tie-neck denim blouse, she is a dynamic, engaged speaker, sometimes asking questions of her interviewer or moving around the room to illustrate a point. Her descriptions of her duties often flow from administrative jargon to moving accounts of courthouse drama.

As trial court administrator, Barrier handles tasks such as coordinating civil hearings and scheduling juror summonses. But the full scope of her duties extends far beyond that.

In May 2020, Barrier also became the courthouse’s COVID-19 coordinator. Since then, she has worked with other top-tier court officials to establish the numerous shifting health precautions the courts have adopted over the past 20 months.

Barrier is one of the courthouse’s two disability access coordinators, providing equipment like hearing aids and crutches to those who need them for court. And judging from the many visitors, phone calls and emails she received on a recent Tuesday morning, many court employees consider her their go-to problem-solver.

One of Barrier’s first challenges that day came from a person wanting to bring a service animal to court. In her 17 years working there, Barrier had never received such a request. But she knew who could help.

She sent a quick email to, and left a voice message for, the disability access coordinator at the Administrative Office of the Courts, which oversees judicial functions for North Carolina.  Then she waited.

‘Oil upon those troubled waters’

Barrier recalled one occasion where she spotted a man arguing with an arbitrator after he’d missed his hearing. She told the man that the case was out of the arbitrator’s hands, but that she could reschedule it for him.

He turned his frustration on Barrier. He ranted for the entire trip to the ninth floor, and when they left the elevator, he was still too distraught to be reasoned with.

“He’s bent down like this,” Barrier said, crouching and staring at the floor with tense hands framing either side of her head. “He’s just, ‘This is not right, this is not fair.’”

Not wanting to tower over him, Barrier said she crouched to his level. She asked if he had a certain document, and he handed it to her. She copied it for him and rescheduled his case. Then she gave him her phone number and email address. That way, he could double-check the time before coming to court.

“He said, ‘You know what, I want to apologize for my behavior earlier,’” Barrier said. “’You know, you just come to the courthouse and people tell you things, and this case is for a lot of money.’”

Barrier sympathized. “I’ve been to places and people just tell you, ‘no,’” she said. “And then you find out, it’s not true.”

Barrier said she focuses on finding ways to get people a “yes.” And her coworkers bear witness to those efforts. The first time Clerk of Court Archie Smith — the courthouse’s chief administrator — met Barrier, she was dealing with a particularly disagreeable woman whose case was being transferred to Superior Court.

“She spread oil upon those troubled waters,” Smith recalled. “The next thing you know, they’re walking off together like best chums.”

Trial Court Coordinator Suzanne Hansen, who works under Barrier, marvels that her boss “never forgets a face or a name.”

Employees and laypeople alike frequently find themselves in Barrier’s wing of the courthouse, lost. Everyone in the wing is happy to give directions, Hansen said. But, she said, Barrier likes to accompany a person to make sure they get to the right place.

During a recent interview, Barrier handled various mini crises typical of a Tuesday morning in the courthouse.

She got a response on her service animal question within half an hour: They are allowed in courtrooms, but a judge can order them removed if they interrupt proceedings.

“Can you send an email to me and we can work on getting interpreter badges?” she told Owens after handing her the badge.

Barrier remains in her office until 7 p.m. most evenings, Hansen said. And when she goes home, Barrier said she often takes calls at night and on the weekends.

Asked about work-life balance, Barrier said, “I don’t think I really have one. I think it’s all just muddled together.”

This devotion has limited her personal life. Barrier said she’s too busy to take care of so much as a “hermit crab,” even if she kept it in her office.

“It would surely die,” she said.

But Barrier doesn’t regret the time she devotes to her career. Instead, she sees her “work family” as essential to her life.

A portion of a wall in Barrier’s office testifies to her impact on this “family.” Countless cards, notes and letters clutter the space, many attesting to Barrier’s kindness and service.

“Dear Deneen, Maria and Patty,” Barrier’s former boss, Kathy Stuart, wrote in a handwritten note to Barrier and two others. “Thank you for traveling 350+ miles to Richmond last month so that you could surround me with love on a tough evening.”

“Thank you again for your usual, wonderfully professional courtesies extended to me during my recent stop at your courthouse,” wrote attorney John Bussian in a typed letter. “Arranging hearing time within 24 hours and a way to obtain a copy of the file within minutes are truly remarkable feats of public service. No wonder I feel, in all the other courts in which I appear across the country, none approach the Durham County Superior Court!”

Barrier pointed out that she spends more time with her coworkers than she would with a spouse and children at home. She fought to contain her emotion while looking at the notes.

“Sometimes, when it’s tough and you need a bit of support, it’s good for me to go to that wall,” she said, blinking back tears.

PHOTO ABOVE: Deneen Barrier sits at her desk at the Durham County Courthouse. Photo by Josie Vonk, the 9th Street Journal.