Home » Reflections: Does courts coverage do more harm than good? 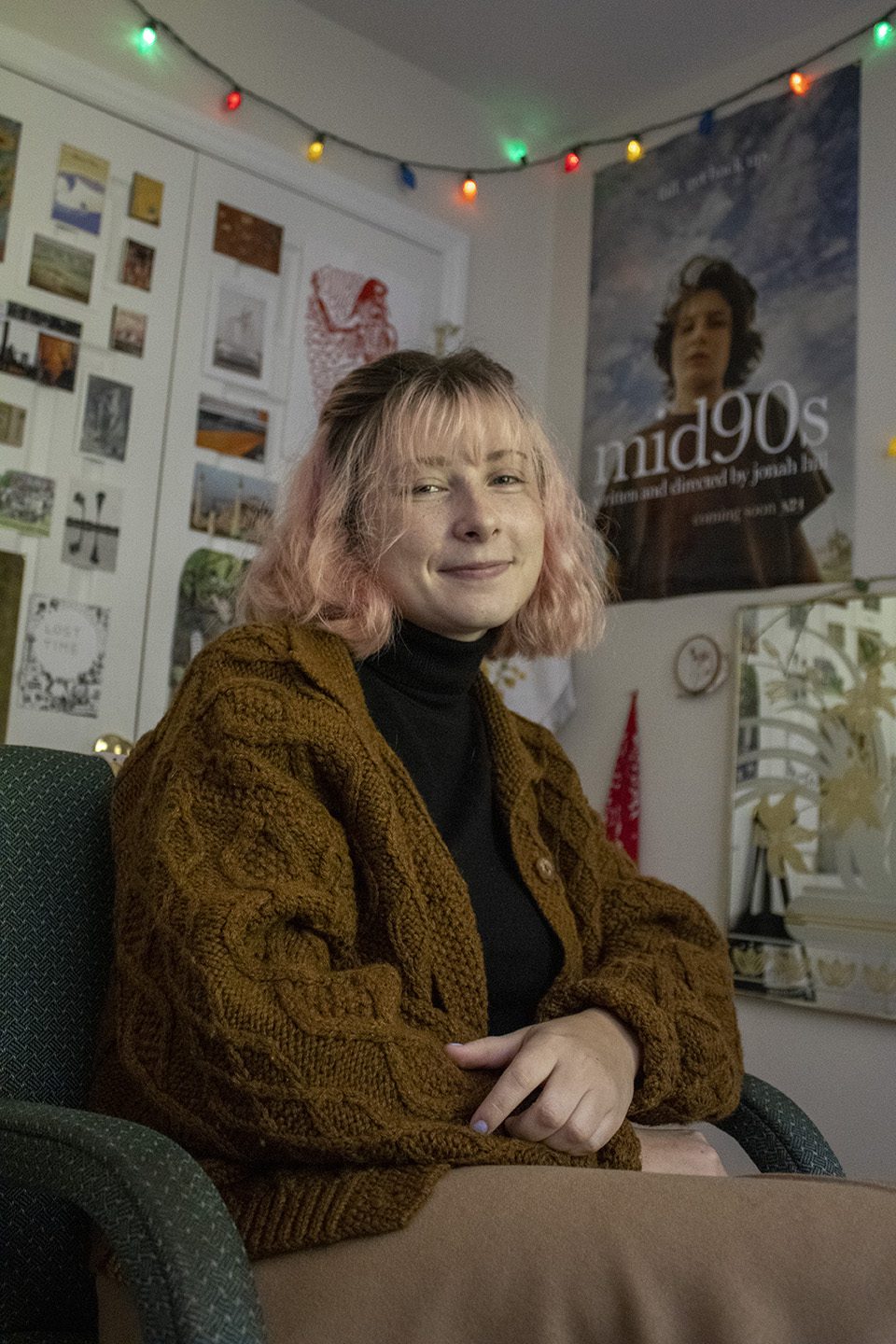 Reflections: Does courts coverage do more harm than good?

It’s the fourth week of school and I’m crying in my editor’s well-lit office.

It’s nothing serious — I cry frustratingly easily, often about things that I’m mildly stressed about or invested in.  It’s involuntary and annoying.

I’m crying in my editor’s office, across his honey-colored desk, because I want to leave the names out of my story, and he wants to leave them in.

I wrote the story about something I watched happen in traffic court, a moment of simultaneous justice and mercy in a place where seemingly mundane rules can transform people’s lives.

The judge sentenced a 30-year-old man to 10 days in jail for driving while impaired with a revoked license, despite his attorney’s plea that he’d been coping with the aftermath of his mother’s unexpected death. While security personnel sorted the man’s belongings and took him to jail, a college student read an essay about traffic school to the court. The judge dismissed the 19-year-old’s speeding and marijuana charges and sent him back into freedom with a “Good luck to you, sir.”

Stephen Buckley, my editor, gave me this working definition of journalism in a moment of crisis the week before: true stories for the public good. I scrawled it on an empty page in my notebook three pages before the traffic court scene went down.

If it were up to me, despite the 11 hours I spent in court this week, I’d have written nothing at all, I tell Buckley. I don’t think this story does much for the public good. I ask him if we can leave the piece unpublished or take the names out, and he says that’s not up to us to decide. Everything that happened in that courtroom is already public information.

This point I still disagree with. Just because information is public doesn’t mean it’s ethical to amplify. I believe that in general, it might be a good thing that you have to visit the courthouse or pay a website to find a person’s dismissed charges.

However, Buckley gently explains other important ways my thinking is wrong. I’m paraphrasing my impressions here because I didn’t take notes or record.

This is why you have to try to talk to people and not be a chicken, he says. (He doesn’t say the chicken part.) They might be completely game to talk to you for an article and you’re missing out on an important perspective — theirs.

Also, you’re assuming readers will think the worst of the people in your story, he says. Have a little more faith in them. You actually paint this teenager in a good light. People won’t judge him just because the police charged him.

But because I’m guilty of skimming news articles and missing humanizing details, I’m skeptical of the reader.

It’s an easier and more straightforward process to clear your name in the courts than in the newsroom, at least in Durham. I think this might be because what the court sees as punishment, journalists see as information. Also, when you’re writing an article due at 11:59 p.m., it can be hard to imagine what it’ll be like for someone to have that story still tied to their name on Google in 30 years.

Some newspapers deny unpublishing requests on principle, and some use nebulous criteria. Some will add an addendum about dropped charges but not alter an article’s original text. Editors often decide on a case-by-case basis.

In North Carolina’s courts, you fill out a form and pay $175 to clear your record of prior charges and convictions. There are how-to websites. You can get free legal assistance. The DA’s office itself has petitioned the court to do this for juveniles prosecuted as adults.

Not everyone is eligible, but the 2020 Second Chance Act allows people a new legal start. They can erase from their record non-violent misdemeanors, dismissed or not guilty charges, and certain juvenile convictions.

“In a lower level case, having your arrest and your mugshot easily called up on Google anytime someone searches your name for the rest of your life might actually be a stiffer consequence than the crime itself,” said Sarah Willets, spokesperson for Durham’s District Attorney’s office. “That could follow you for far longer than any sentence that the law would allow.”

I went to Willets looking for expertise on the collateral damage of courthouse coverage because she’s had a foot in both journalism and prosecution. She worked as a crime reporter for years and now she manages communications in an office where prosecutors typically can’t comment to journalists.

Willets thinks the press play a vital role in the courts. But, she said, they could play that role more ethically.

Consider whether you’re writing for the public good or just because a story’s kind of interesting, and someone might want to read about it, Willets said. I believe my story fell into the second category, even though I was hoping to write something of the first.

Willets told me she fought with her editors too. She wrote about a reentry program and one man’s experience leaving prison for her last story at Indy Week. She wanted to leave the man’s crime out, her editor wanted to leave it in.

The city — Durham — had decided he should move on, she said. “And who are we to stand in the way of that?”

Her editor countered: that’s a big thing to conceal from readers. The editor won — the man’s conviction sits in the fifth paragraph of the published story online.

I left Buckley’s office thinking he too had won, that we would publish the story, and with names. But to spare me the stress, and because the primary goal of this class is to learn, not just to publish, he told me later that we wouldn’t.

Before I keep complaining about being a “student journalist” who doesn’t seem to want to publish any journalism, I’ll flash us back to last fall. I was among a crowd of protestors in head-to-toe black that set off fireworks outside Durham County jail.

Earlier in their march they’d chanted, “News is cops, news is cops,” and blocked TV cameras with umbrellas. I’d chanted along the rest of the night, but in those moments I hesitated, not sure what to say.

I was in a news writing class at the time and thought I wanted to become an audio journalist.

Four days later I was back in journalism class and still thinking about it. If news is cops, should I be writing news? Can journalism avoid this?

A friend who was there that night graciously gave me some of their time on the phone. They told me a local TV station had posted mugshots of their friends arrested for protesting earlier that summer. Then those friends got doxxed, which means readers found and published their private information online, a particularly vicious revenge tactic. The news cost them.

My traffic court article was a different situation entirely. Buckley told me so while I objected, and he was right. But I do think about how what my peers and I write can reinforce the judgments of a broken criminal legal system.

How do we balance readers’ trust with future costs to our sources, costs exacerbated by internet longevity? Is every omission an effort to conceal? How do we minimize harm while maximizing the public good?

Willets gave me a few recommendations. In essence, she said, look for consent and context. Talk to the parties involved — especially victims — and make them understand how this story could follow them, she said. Situate the criminal case within the social issues forcing people to come to court, like lack of mental health care or community investment. Study the research around crime. Stick around and follow through.

This advice is hard to follow on deadline. Court cases can take forever: even the simple ones may drag on for months or years.

Sarah Koenig and Emmanuel Dzotsi spent a year reporting Serial season 3, the podcast that inspired the creation of the 9th Street Journal’s courthouse reporting project. Each vignette they present from the Cleveland courthouse consists of months of interviews. Our vignettes, or “Courthouse Moments,” pan out over one week.

Maybe that’s where I land: I’m unwilling to do quick journalism, even if that means I won’t be employable in this field. Maybe one day newspapers will make different decisions about whether their quick news should last forever in its original form; maybe we’ll make unpublishing guidelines more transparent to the people we report on.

I don’t think I’ve come to any solid answers. I have a feeling I’ll squirm closer to a conclusion in the coming years, talking through these conflicts with editors (and unfortunately probably after shedding a few more tears).