Home » ‘The first one out there’: How Durham’s elections chief gets ready for the biggest day of the year 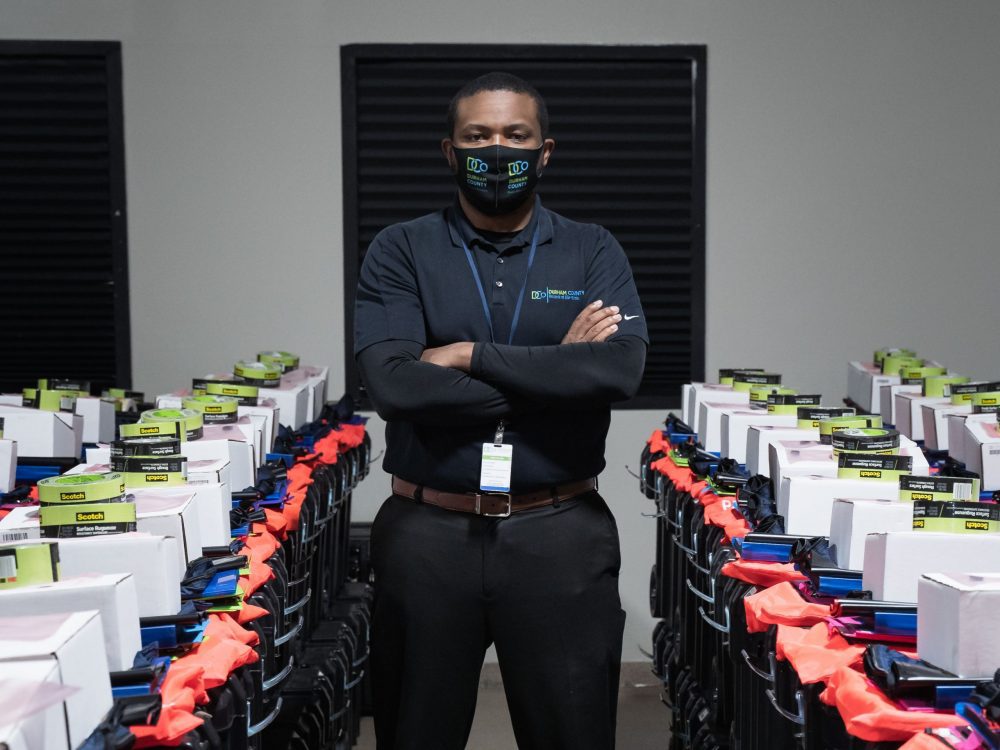 ‘The first one out there’: How Durham’s elections chief gets ready for the biggest day of the year

Every Election Day, Derek Bowens wakes up and plays the most motivational song he can think of: CNN’s Election Night theme.

The song provides an early-morning jolt that gets the Durham County elections director ready for the busy day ahead. The booming drums, violin swells and electric guitar riffs follow Bowens as he springs out of bed, brushes his teeth, and heads to the office just before 5 a.m. If there’s one thing that riles him up, it’s the rhythm of democracy.

Not that Bowens needs a news theme to get going. Fourteen hours a day, seven days a week, he manages precinct officials and elections administrators, oversees voter registrations and absentee ballot mailings, supervises 14 early voting sites across the county, and prepares for the most important day of his year. On Nov. 3, how well he handles those details — from ensuring that over 800 poll workers take their places at 57 precincts to resolving potential problems like jammed ballot machines or power outages — could have a small but significant effect on the confidence and maybe even the outcome of the biggest election of his lifetime.

He loves his work because it matters.

“I see it as the bedrock of our democracy,” he said. “That importance should be met with a level of intensity.”

Bowens sweats the small details. He knows election law inside and out, so much so that his employees joke about how easily he catches the errors they’ve missed.

“I had one staff say, ‘I don’t want to call Derek over to solve this, because the minute he comes over, he’ll find the problem instantly,’” Bowens laughed.

He’s relatively new to Durham, having arrived from New Hanover County in 2016, and his colleagues say the office is more efficient now under his leadership. According to Philip Lehman, chairman of the Durham board of elections, there were 792 mistakes of various degrees in the 2016 primary election, which took place before Bowens arrived. In this year’s primary, there were eight.

“Derek is running a multi-ring circus,” Lehman said. “But he’s always ahead of the game.”

In the tight-knit world of election administrators, reputations are earned on the little stuff. As director of elections in New Hanover, home to Wilmington, Bowens became known for his well-organized warehouses, where necessities from ballot machines to “I Voted” stickers are kept.

But don’t look for signs of organization on his desk. Papers are scattered across the cherry wood — calendars, time sheets, fliers, and reusable paper towels (he wanted to see if they could be used to sanitize polling places).

“They say organized people have the messiest desks,” he deadpanned.

Colleagues say he never loses his cool. When a problem arises, he goes into solutions mode, turning his eyes to the sky. His employees know that when he lowers his eyes, he’ll have a plan.

“There was never a moment where he seemed panicked or overwhelmed,” said Samuel Gedman, former deputy director of elections. “He simply lays out what needs to be done. In this business, that’s huge.”

“We feel confident that things are under control”

In a conversation with Lehman, Bowens once gave his top three priorities in life:

Elections appear to be a newer passion. Growing up in Wilmington, he lived in an apartment in the projects with his single mother, sister, and two brothers.

His mother, who worked at a preschool, tried to expose her children to positive experiences while shielding them from the drugs and violence of the inner city. Eventually, she married Bowens’ stepfather, the owner of a local painting company who built the family a house in the suburbs when Bowens was 12 years old.

But the years of poverty had made their mark. Bowens wanted to keep climbing up.

“I had a decision to make, to be better than my circumstances,” he said.

He was a good student in high school, a self-described nerd. He was president of the debate team and won a “principal’s choice” award, accomplishments that helped him earn grants to subsidize his college, which he split between UNC Charlotte, community college, and UNC Wilmington. He was determined to graduate with honors.

He wanted to give back to his mother.

“My mom is very important to me,” he said, his voice softening. “I want to be in a position where I can do everything for her, so she doesn’t have to worry about a thing.”

The 2008 presidential election was a turning point in his self-realization, when he saw a Black man on the ballot for the first time.

In a necessarily nonpartisan job, Bowens doesn’t talk politics. He says he doesn’t have a stake in who wins the elections he oversees, “or care, for that matter.” Still, Barack Obama’s candidacy and subsequent presidency rocked Bowens to his core.

“It was something that I could never fathom,” he said. “It was the first time I felt like I could do something in this country.”

After graduating college in 2011, he got a job as a New Hanover County elections specialist in Wilmington and quickly ascended the ranks. By February 2015, he was the county’s director of elections — at age 27.

Bowens is now 32, significantly younger than many of his employees. But Deputy Director Brenda Baker says he has an old soul.

“He could be any age,” she said. “He’s very mature, a methodical thinker, and a great problem solver. It’s impressive.”

Lehman said Bowen is “the kind of guy that, when he talks, you listen. With his leadership, we feel confident that things are under control.”

Bowens says any worries about a chaotic election are unfounded.

“I have every confidence in our ability to execute a great election here in Durham,” he said.

More worrisome to him is the threat of voter suppression, which has historically disproportionately affected Black and Latino voters. In September, President Trump encouraged North Carolina citizens to “watch all the thieving and stealing and robbing” at the polls, pushing misinformation about the prevalence of voter fraud while seeming to encourage voter intimidation. Later that month, his son Donald Trump Jr. released a video calling for supporters to “enlist” in an “army for Trump.”

At the mention of voter intimidation, Bowens’ jaw clenched.

“We’re doing everything we can to create a safe voting environment in Durham,” he said. “The issue of voter intimidation is very important, and it certainly won’t be tolerated.”

For years, Durham County has dispatched unarmed security guards to polling places to protect voters from instances of intimidation. Two weeks ago, the North Carolina State Board of Elections told elections officials that law enforcement could not be assigned to a polling site. But Bowens appealed the decision and got Durham’s policy reapproved.

In addition to the unarmed security guards, if a precinct in Durham does see an instance of voter intimidation, “I’ll be the first one out there, I can tell you that,” Bowens said.

Durham’s approach to voter suppression is largely an expression of its racial and ethnic diversity. The county’s “cultural melting pot” allows Bowens to feel at home here, which he said wasn’t always the case in Wilmington.

Durham elections officials welcomed his arrival in 2016, after years of turnover in an office “flying by the seat of its pants,” according to Lehman. Before Bowens, they had no written manual of office procedures. Within months, he wrote a manual.

During Baker’s interview for the position of deputy director, her first impression of Bowens was of a “pretty serious and very precise person.” At first, she worried he would be a tough boss.

But after 5 p.m., when the phones finally stop ringing and the office closes for the night, his employees see him at his most comfortable.

He takes off his shoes and wanders the office in his socks. He whistles to himself and blasts Michael Jackson’s greatest hits from his phone. When Gedman worked in the office, they’d turn on the Dirty Dancing soundtrack.

Bowens says unwinding together at the end of a long day helps the office build comradery.

“We spend more time together than we do with our own families,” he said.

He doesn’t see his own family much these days. He says his wife, Andrea, doesn’t always agree with his commitment to the job, “but she understands the importance of it,” he said.

He misses his 3-year-old daughter, Harper, most of all. When trying to describe her, Bowens shook his head in awe.

“No words,” he said. “I just love being a papa.” He wishes he could spend more time with her.

“But this is our democracy,” he said. “It requires sacrifice.”